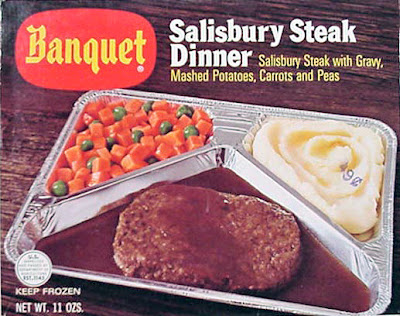 They just don't make 'em like they used to:

Anyone still remember Libbyland? I do.


Here's a Swanson's ad fron 1975. This was seen during the W.I.N! (Whip Inflation Now) campaign of President Ford. And just LOOK at all the meat you're getting! A thigh, a drumstick and a wing. Even my mom saw through that one and bought the more expensive stuff. She knew you didn't feed a kid like me on a meal that barely qualified as a snack for the North Korean army:


And finally, who could forget THIS one. Banquet specialised in frozen "family" entrees in this long-played '60s commerical - well into the '70s....

Posted by Larry Waldbillig at 7:22 pm