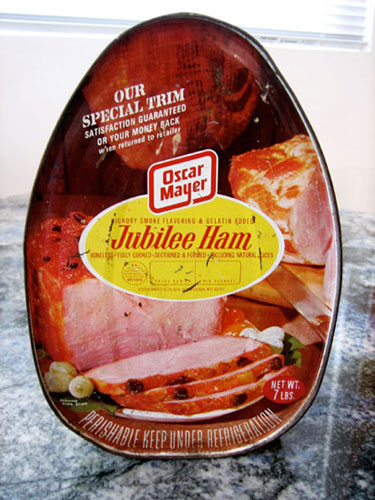 Canned ham isn't what it used to be.

Today, it's mostly fat and and other questionable pork product slapped together in small non-perishable cans, often packed with processed cheese and crackers in gift baskets that say to the recipient. "I'm thinking of you. And I hope you have a heart attack. Soon."

But back in the day, canned ham was in large, perishable cans that needed refrigeration. And until the '80s when plastic wrapping became standard, it was the only way to buy a ham outside of a butcher shop.

And it was actual ham. And good quality too. It didn't have that plastic taste of most plastic packaged ham today.

To open a canned ham, you had to open it with a small key that was soldered/molded on the back of the can and find the leader tab (some canned ham today is still made this way) and begin to twist and hope you can wind your way around the ham without the winding metal strip - or the key - breaking. Otherwise, you have to dig in your toolbox for the needlenose pliers to complete the process.

That is if you didn't inspect the can before you put it in the cart. Sometimes, the keys ended up missing or fell off during shipment to or from the store. Either way, an extra pair of needlenose pliers became standard equipment in my mom's kitchen utensil drawer in the '70s. And still is in mine.

When you finally opened the can, you were treated to the most unappetizing sight. The ham was coated in a gelatinous goo that had to be rinsed off. And it was slippery too.

It's very hard to find a REAL canned ham like this today. Plastic wrapping has made the manufacturing far cheaper, but like I said, it also tastes like plastic. The fact that most of it has very little, if ANY fat doesn't help.

Posted by Larry Waldbillig at 6:51 am