When I was a kid. Holly Hobbie used to scare me.

It's not that she was just some creepy mass marketed doll-product from a greeting card company (like Hello Kitty) that my sister and just about ever girl in the early to mid '70s liked.. It was also the fact that Holly Hobbie was supposedly a 10 year old girl, but with the look and homeliness of an 80 year old grandmother.


You never saw her actual face. Her illustrations were always a side-shot, her entire head was always hidden behind a HUGE blue bonnet, adding further to the creepiness.


And there was really nothing exciting about Holly Hobbie. She was homely and dull, as were most of the girls who collected her merchandise back then. A girl who liked Holly Hobbie back then usually wasn't the kind of girl who also liked to go dirt biking in the mud with the boys.


Utterly the very worst Holly Hobbie product I can remember is this atrocity. A phonograph with a fake gramophone horn 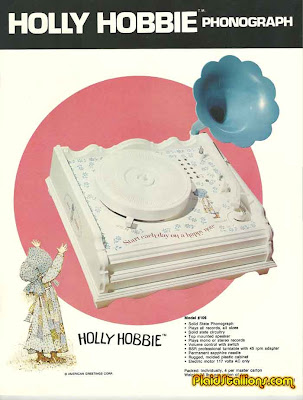 .....and apparently, some knucklehead recently brought it back.....


Holly Hobbie began disappearing from girls bedrooms and lunchboxes soon after Andy Gibb and Leif Garrett came out. And the once quiet and homely Holly Hobbie girls were soon replaced by packs of chatty, disco crazed groupie wannabes who swooned over every issue of 16 and Tiger Beat magazine and couldn't hold even the most casual conversation with other boys without mentioning one of these guys and their starry-eyed adoration of them and visions of their future plans together - BLEECH! And suddenly, Holly Hobbie didn't seem so bad to us after all.

And they still didn't want to go dirt biking in the mud.....

Posted by Larry Waldbillig at 7:03 am