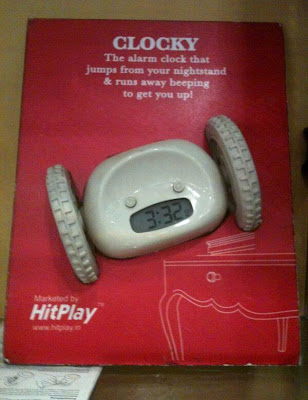 I never want to own a Clocky. And I may seriously hurt the person who gives one to me.

Apparently, it's an alarm clock. that jumps off your nightstand and makes you chase after it as it beeps away.

Apparently, somebody thinks the Clocky is a CUTE idea. And as a man who HATES to wake up early in the morning (this post was scheduled in advance, there is no way in hell I am getting up at 6:30 in the morning to write ANYTHING), I hope he/she spends their afterlife eternally chasing their inventions.......

I actually thought this thing was a JOKE because I started seeing it all over my Facebook page, but apparently yes, this is a REAL product.

Posted by Larry Waldbillig at 6:26 am