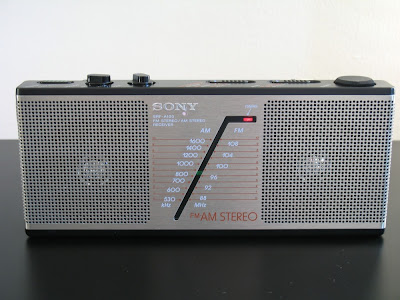 AM Stereo was an invention designed to give AM radio stations the fidelity and depth of sound as FM.

In the '80s, FM radio became the preferred band for music listening. It was high fidelity and in sparkling clean stereo while AM was monaural and lacked any real fidelity. As a result, most AM music stations began changing to news and talk programming or oldies from AM radio's '50s and '60s heyday before FM came of age.

AM Stereo was a technology that was to level the playing field. And it would have worked. Had there been less confusion in the marketplace.

Most of the AM Stereo systems sounded not just on par with FM, but in many cases, even BETTER. There was a depth and body to the sound of AM Stereo that very few FM stations could match. Even the standard monaural AM signals sounded better on an AM Stereo receiver.

When AM Stereo was introduced, instead of settling on one system of transmission and reception, the FCC took the unheard of step of a "free market" approach. Meaning the listeners would decide which method worked the best. And there were 4 incompatible systems to choose from. Sony made radios that were capable of receiving all modes of AM Stereo transmission.

In most cases, the listener didn't know which station was using what system. To add to this confusion, the AM stations themselves often never directly promoted the transmission system they were using.

And AM Stereo didn't combat the worst problems of AM radio. The static problem and RF interference from CRT tube TV sets, home computers, lightning storms and car ignitions were still there. And stations on Class IV Local (Or "graveyard") frequencies (any station that broadcasts on 1230, 1240, 1340, 1400, 1450 and 1490 kHz on the AM radio dial.) Which cannot broadcast at more than 1,000 watts were still prone to the roaring background noise mush of thousands of other stations on the same frequencies if you weren't close enough to the station towers after sundown. Just tune any one of those frequencies at night and tell me what you hear.) A problem that still exists today.

AM Stereo has been made standard in many stock car radios in the '90s to the 2000s. But most listeners tended to ignore it as most AM stations had dropped transmitting in stereo and carried talk programming.

However, there are a few AM music stations that still broadcast in stereo.


KEVA 1240 AM  Evanston, Wyoming is a Classic Hits formatted station in southwest Wyoming. Still broadcasting in AM Stereo!


This is an aircheck from JOLF 1242 AM in Tokyo. Note it's strange frequency; in Europe, Asia and Australia (in 1978) used 9kHz spacing between frequencies. In the Western Hemisphere, 10 kHz spacing is used (with all frequencies ending in 0.)

Will it ever come back? Some people think (or at least hope) so. There's been a lot of talk recently about reviving the AM radio band (Step One: Stop running right wing talk, religion and sports.)

There's also a system called HD Radio that many FM stations use, but has been a failure on AM because of interference problems for distant/nighttime listeners (it doesn't sound very good either.) And some HD Radios have built in AM Stereo circuitry. which defaults to AM Stereo if no HD signal is received. But it depends on the station. No Stereo signal means no stereo output. Even though it should be used as a back-up, very few HD equipped AM stations do.

Posted by Larry Waldbillig at 3:15 pm