I have a confession to make.

I LIKED the 8-Track tape.

Before we had all these virtually disposable MP3 players with little tiny "earbuds", before CD players, even before cassette tapes, we had 8-Track tapes.

8-Track tapes were actually an extension of the earlier and not-quite-so-popular 4-Track tape.

The 4-Track tape, like it's successor, was originally made and designed for one thing: Cars. Home and portable players actually didn't come until a few years later.

However 4-Track tapes were different in two very big ways, it was 4 tracks on 2 programs, the rubber "pinch wheel" was a part of the player and not inside the tapes themselves.

The 8-Track tape (usually) starts instantly with a good shove, the 4-Track slowly grinded up to speed.

But without a pinch roller and a gaping hole in the bottom of the cartridge, dirt, dust, cigarette ashes, careless fingers and other ick gets in there, adding grinding friction.....

So the 4-Track was pretty doomed from the start.

The 8-Tracks were an improvement over the 4-Tracks because they were separated into four programs (on smaller tracks), doubling the amount of music on a tape. You could put an entire double album on one 8-Track and it could play up to 90 minutes. plus the cartridge was better sealed (though hardly invincible either.) In fact, there were even adapters you could buy that would let you play 4-Track tapes in an 8-Track machine. 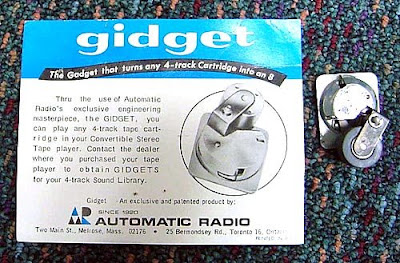 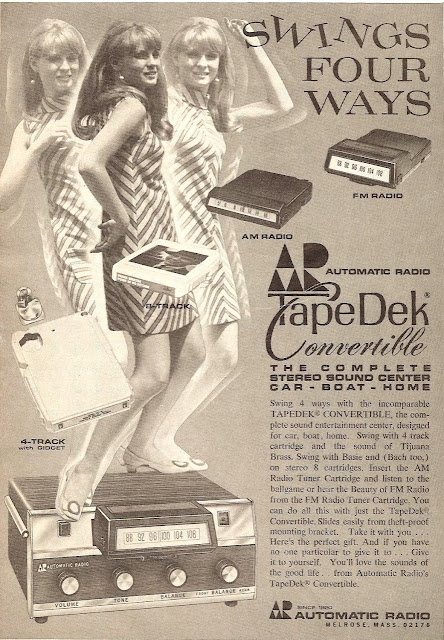 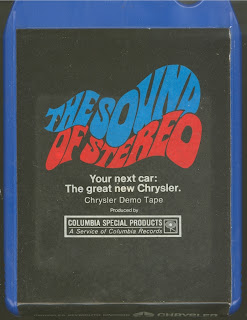 8-Track players became standard equipment in many cars. Listen to the tape above here:

And at the time, they were also cheap to make and sell.

Bootleggers and counterfeiters loved 8-tracks. They could record albums onto blank 8-tracks, slap a preprinted label on them, and sell the forgeries at flea markets and truckstops for half the cost of the original authorized product.

As the story goes - this was actually printed on many stock inner sleeves of Phonogram labeled vinyl record albums (Phonogram owned the Mercury, Phillips, Fontana and Smash! labeled record albums in the early '70s) as an early anti-piracy warning. It goes along the lines of this. While Jerry Lee Lewis was getting a fill-up at a gas station, he noticed a rack of 8-Track tapes for display. Upon further examination, he discovered that the tapes contained his latest music – but they obviously didn’t come from his record company (Mercury, at that time.)

“Where did these tapes come from?” he asked the gas station attendant.

“Oh he does, does he?” With that, Lewis grabbed a tire iron and smashed the rack and bootleg 8-tracks to pieces.
The attendant freaked out, “What the hell am I going to tell the guy when he comes for his money on Monday?”

Lewis got back in his car. “Tell them the Killer was here,” he said, driving off.

(I still wonder how the attendant tried to convince this distributor that Jerry Lee Lewis HIMSELF actually showed up to do this.)

And some people even thought THESE were a good idea..... 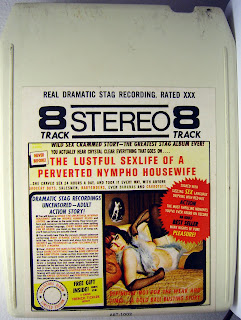 But the 8-Track was plagued with problems from the beginning. Because the tape on 4 & 8 Track tapes was in an endless loop, rewinding an 8-Track tape was like putting toothpaste back inside a tube. You could fast-forward, though not much faster than the actual playback speed (you would also shorten the life of the tape by that much more.)  The tape heads of an 8-Track player would eventually get out of alignment, resulting in "crosstalk" from the other tracks. Worst of all, the recording companies would always fade out in the middle of a song to jump to the next track.

It REALLY hurt if that was your FAVOURITE song.

And blank 8-Track tapes were even more miserable. You had to radically time every song in each program with a stopwatch for the length, meaning your perfect mixtape will most likely be out of order, in order to use up as much of the available tape as possible (which was always RARELY achieved for me. I usually had anywhere from 2 -7 minutes of leftover tape on each program.)

With 8-Track tapes, you often suffered more for your music than the original artist did.

Cassettes, for all their hiss and low-fi then, were much easier to deal with.

They were less bulky. And the players were getting bigger (and smaller.) And they were getting BETTER. So began the 8-Track tape's decline.

However, the 8-Track didn't go so quietly. New uses were attempted to salvage the 8-Track tape. Such as games.

But the writing was already on the wall. The 8-Track was NOT coming back. No way, no how. 8-Track tape selections were already dwindling as the cassette selections got larger. By late 1983, they had completely vanished in all my local retail outlets.

Even the 8-Track machines themselves could get a clunky, noisy, low output cassette upgrade with these...

The last "new" pre-recorded retail 8-Track tape I remember seeing was Iron Maiden's The Number Of The Beast (1982) in the $2.98 "budget" tape bin at Fred Meyer Music Market in Lynnwood, WA. Ironically, the album was still popular and a HUGE seller on vinyl and cassette but sold for $7.98 in those formats at that same time, making this one 8-Track a SUPER steal - if you still had an 8-Track tape player. Which explained why this one was here at this price I guess. I'm still kicking myself for not picking it up while I had the chance.

However, both Radio Shack and Montgomery Ward catalogs still sold 8-track players. Ward's would stop selling them by 1986. However, in the dimly lit back corners of any Radio Shack, you could still find blank 8-Track tapes and even a player or two well into 1990.

If you still wanted pre-recorded music however, Columbia House and The RCA Music Clubs still released new music on 8-Tracks until 1988, albeit a dwindling selection over time. The last 8-Track tape of NEW music then, was the Cocktail movie soundtrack.....

And perhaps the very last one PERIOD was Dire Straits' 1988 compilation Money For Nothing, released in October, 1988......

You'd think that would be it. The end. Get over it Grandpa. But the story is FAR from over.

Thanks to the internet, it became apparent there were still little groups of people so dedicated to the 8-Track tape, they formed a small cult fanbase and rounded out the wild history of this most bizarre of all recorded mediums.

And people who had to hide their own secret love for this medium finally began coming out in a mass that would impress Queer Nation. And suddenly, the 8-Track tape went from "EWW!" to "AWESOME, like that's so retro!"

Grunge rock pioneers The Melvins issued an 8-Track tape of a live album in 2000.....

...and even Cheap Trick released their 2009 album The Latest on 8-Track tape 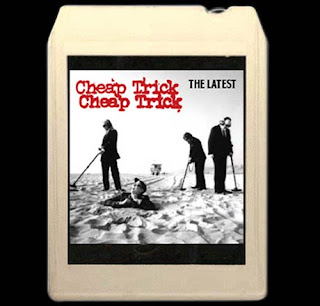 And the today's generation is even bringing new life into these things. Check THIS out!

In fact, it's not unusual at all to find dead audio formats getting a new reboot with today's kids, thanks to the internet and a little experimentation. Vinyl sales are still growing and even the cassette is making a comeback.....

Here's a MUST see DVD, So Wrong, They're Right: An 8-Track Loop Around The U.S. It follows and chronicles the 8-Track underground.....

UPDATE: You can watch the movie here: