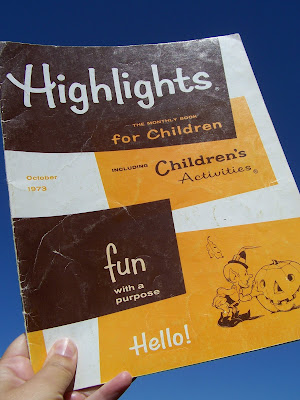 When I was a little kid (before I discovered Mad and later, Rolling Stone, Highlights was my favourite magazine.

It was fun and simple reading. And who could forget Goofus & Gallant? All I know is who had offspring. And it wasn't Gallant (even then, I was expecting a "coming out" issue of some kind.)

The articles were mostly factoids and basic American history. But it was the way they were written that I liked. Although Highlights avoided controversial topics of any kind (which during the years of Watergate hearings breaking into my favourite afternoon cartoon shows and my mom calling Nixon a duplicitous lying son of a bitch at the TV, wasn't such a bad thing.) I was already hearing enough of it.

Posted by Larry Waldbillig at 6:59 pm