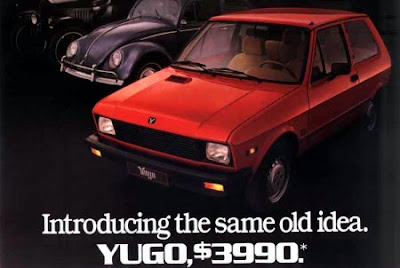 What can you say about a car that literally rusted on the dealer's lot?

Basically a pop can on wheels, the Yugo's idea was good. A compact car for a compact price. But that's where it ended.

The Yugo's engine tended to break down. Often (the timing belts needed constant inspection.) You also had to use a specific octane of fuel and did I mention the Yugo was a pop can on wheels? Extremely high winds could literally flip the car over.

Also being a car manufactured in a then Soviet-bloc country didn't help it's image.

Yugo ended US exports shortly after the fall of the Soviet Union and the collapse of Yugoslavia itself in 1992.
Posted by Larry Waldbillig at 10:09 pm