Song For Sunday: "I Am A Promise" Bill Gaither Trio 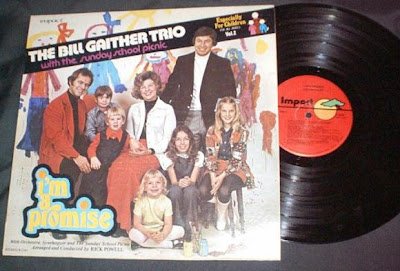 When I was around 9 years old, my sister dragged me to a bizarre Sunday school called Church Alive! in Lynnwood, WA.

Not really a Christian person then (still not) and with all optimistic cheer of Wednesday Addams. I went to this bizarre, cult-like group of about 100 religiously spaced youth.

It was led by a man who had all the charisma of a drunken moose. He railed against rock n' roll (claiming Kiss was an acronym for Knights In Satan's Service), Halloween was also "satanic". So was anything made by Proctor & Gamble. The list went on.

The group was divided into teams of 25, represented by the colour of bus each group rode, The Blue Bombers, The Green Machine (I can't remember the other two.)

They had a special affinity for a religious singer named Bill Gaither. And this song was played at every service. I don't know how my mom came into possession of this record (they must've drugged her and slipped it in amongst her Captain & Tenille and Linda Ronstadt records) She actually thought I liked this record.

I responded by destroying it.

Posted by Larry Waldbillig at 6:34 am