Anyone who grew up in the '70s and '80s and spent any time watching TV remembers these commercials.

They were irresistible records (or 8-Track tapes, cassettes were offered by 1978), filled with all the latest chart topping hits. And yours for SUPER cheap at your nearest discount or drug store. Even some supermarkets had these.

Like it's conceptual offspring, the NOW! CD series of the '90s to today. In '70s and '80s, K-Tel and Ronco records were an awesome deal. (But only somewhat, I'll explain in a little bit.)

For less than the price of a full length album from one artist (packed with more filler than you can shake a meatloaf recipe at.) K-Tel and Ronco records offered nothing but hits. Lots of them (and even a few that made you wonder how they got on there....You didn't hear these on the radio.)

And all on one record. Sometimes two records. My vinyl buying trips landed me some real albums, some 45s, but nearly always a K-Tel or Ronco in the bag as well to round it out. Grab me some sodas and my night was complete.

Now for the disappointing truth. In order to pack so many songs on one vinyl record, some sacrifices had to be made.

You see, a regular 12" inch vinyl LP can hold up to about 23 minutes of music per side. This simply means the grooves were cut at normal depth and width.

For a K-Tel or Ronco record, the grooves were much finer. But the reduced depth/width of the grooves also meant reduced dynamic range.. So it really didn't sound as good as a conventional record and you had to turn up the volume a bit louder than you would on a regular album. Plus, they were also more susceptible to surface noise - sometimes brand new out of the sleeve. Stuck and skipping records were common without extreme care.  But you had a record that could play for nearly a full half hour per side (usually 27-28 minutes), if you weren't too picky.

Worst of all, on the earlier K-Tel/Ronco albums, the songs were often edited to a total running time of 2:30 EACH.

Some songs (such as "One Bad Apple" The Osmonds) were easier to edit seamlessly for a K-Tel/Ronco album (most of The Osmonds early hits were around 2 1/2 minutes anyway.) Other songs, no matter how sacred ("Layla" Derek & The Dominoes?) were hacked to their fundamentals. Entire verses and sometimes endings were also chopped out of other songs on these early 22 song K-Tel/Ronco albums.

The original record companies of the songs included on any K-Tel record actually insisted on this as well, as fans would eventually be more likely to buy the original albums with the full length songs on them.

But practice soon began irritating music fans and the number of songs on the albums dropped. First to 20. 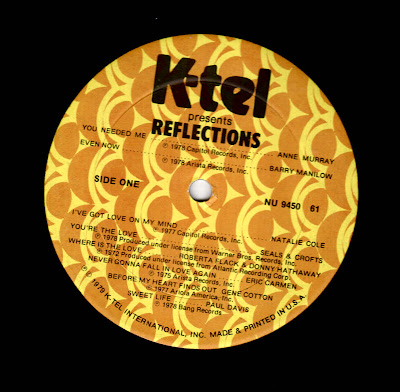 Then to 18. There was also another factor - the songs themselves were also getting longer by the mid '70s, with an average running time of 3:30 to 4:00 for your typical pop song. So the length of a typical song on a K-Tel/Ronco album was increased to 3:00 with some variables (the pitch was often increased dramatically on some tracks to squeeze them in.)

By 1979, Ronco had gotten out of the compilation record business and focused on their household products, leaving K-Tel as the sole major independent manufacturer of compilation albums through the 1980s.

With the exception of a handful of '80s upstarts such as JCI.... 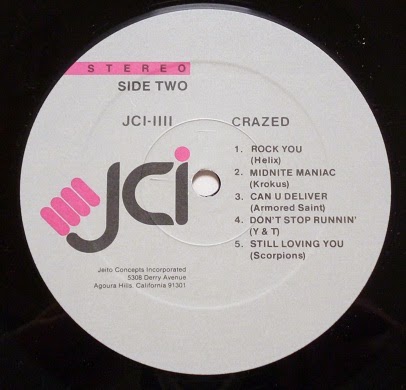 ...and the Capitol/EMI distributed Priority, which would remodel in the late '80s as one of the biggest hip-hop labels on the '90s. Initially, Priority was a cassette-only compilation label..... 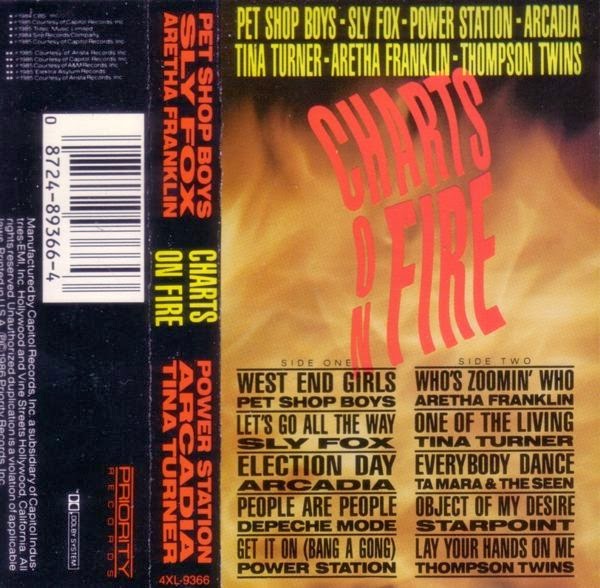 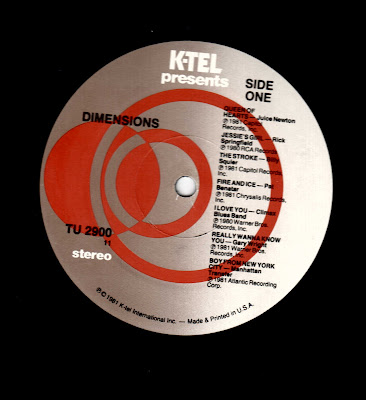 ....K-Tel pretty much had the field to itself.

By 1981, K-Tel had also cut the number of songs on their albums to down 14 (7 per side) and by this time, the audio quality of their albums were nearly on par with any conventional LP. The songs were also no longer edited or pitched and full length. This was cut even further in 1986 to 10 songs per album and they sounded their best.

But this was the end. K-Tel released it's last vinyl album in 1987 before declaring bankruptcy. The major labels themselves soon began releasing their own hits compilations.

(UPDATE: K-Tel is still very much in business today and are still making compilations. On CD too. And they also have an array of household items as well.)

Posted by Larry Waldbillig at 11:01 pm