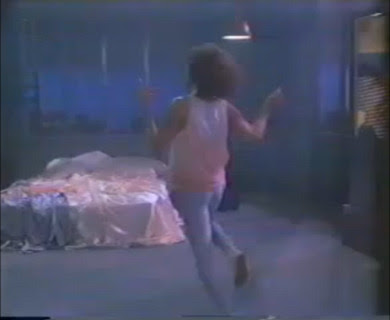 Well, let me put it this way. Billy Squier was cool. SUPER COOL. At one time, he REALLY was the most popular solo rock artist in the early '80s in America, At one time eclipsing Bryan Adams, George Thorogood and Pat Benatar COMBINED. And if you don't believe it,  I'll remind you:

He was at the peak of his career when he released Signs Of Life, and from all indicators, it was going to be ANOTHER blockbuster album. And it was. This baby shipped platinum straight from Capitol Records on pre-orders ALONE. And a catchy new song hit the airwaves, "Rock Me Tonite" and all was going according to plan.

And then MTV aired the World Premiere Video of "Rock Me Tonite".......


....and you could hear the sound of a million jaws collectively hitting the floor.

For one thing, EVERYTHING was wrong with the video. Famous heterosexual rock guitarists just weren't supposed to prance around in ripped tank tops and pajama bottoms. Or dry hump the floor. Or wear ANYTHING pink. Or stumble around with the band like a drunken drag queen (with a PINK guitar.) It was a TOTAL image clash from the Billy Squier of just a year ago then. Fans scratched their heads and said "What the fu.....?"

And it was proof positive a HUGELY successful music career can be destroyed almost overnight by just ONE bad music video.

And Billy Squier, who once HEADLINED stadiums was suddenly reduced to playing much smaller music venues. (His loyalest fans were still plentiful, but the mainstream fans had all but instantly deserted him.) Over ONE video......

The next few years were rough as he tried to live down the "Rock Me Tonite" video. He released an album in 1986 Enough Is Enough which was a far more serious effort in an attempt to recover from the video debacle and return to form. But rock radio and MTV had mostly ignored it. They were too focused on the hair metal bands who, ironically, pranced around in ripped tank tops and pajama bottoms. Dry humped the floors. Wore ANYTHING pink. And stumbled around like a drunken drag queens.

Some even had PINK guitars.

His comeback finally came in 1989 with the release of Hear And Now, which scored him his first #1 rock hit since "Rock Me Tonite" called "Don't Say You Love Me"and things looked good again....


But Seattle grunge came and soon wiped everyone off the map.

He left Capitol in the early '90s and the music business for the most part, doing nature conservancy work but he still makes occasional appearances at Classic Rock shows.......
Posted by Larry Waldbillig at 3:40 pm