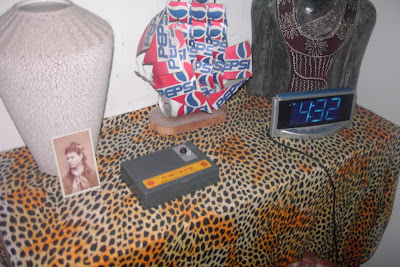 I have a strange gizmo

I can't remember how I found it, but it looked like a little radio, but with no tuning dial. You turned it on and it played a simple Buddhist chant over and over and over again, using a microchip in the unit. That was all it did. On it's side, it had a receptor for an AC adapter and an external speaker (I plugged this into my stereo using a patch cord, but the output was monaural and sound only came from the left speaker of my stereo.) It ran on 4 "AA" batteries. It's model number was #K-747....

Nobody I showed this to knew what it was either. The writing on the unit was definitely Chinese. But although I can tell the differences between Asian characters, I'm not very good at reading them individually. But one character did say "Buddha". So that was my only real clue.

Here's what it sounds like (though the chant my player sounds a little different....)

This little thing was a mystery to me for the longest time. But the back story is just as fascinating as the player itself.......
Posted by Larry Waldbillig at 5:00 pm