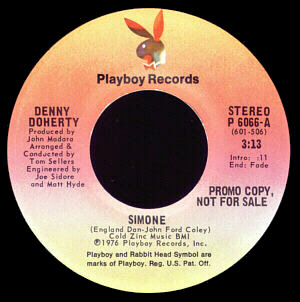 Playboy Records was one of the most promising new record labels of the '70s. With the nudge-nudge, wink-wink, backing of Hugh Hefner's empire and finances, what could possibly go wrong?

Another problem was much of Playboy's roster had only a few recognizable names and the rest were unknowns. Add to the little promotion of their albums and it was a recipe for disaster.

There was also the fact that some independent record stores (namely in the Bible belt) refused to stock Playboy Records - possibly out fear of being accused of smut peddling by clueless church ladies. In reality, Playboy Records had an artist catalog so clean and genteel, it made Mike Curb's uber-conservative management of MGM Records in the early '70s look downright sleazy by comparison and that was the biggest problem of all.

This was the biggest hit on Playboy Records:


With a name like Playboy Records, people were naturally EXPECTING something a little more provocative than soft rock ballads and urban-cowboy country. Perhaps Playboy Records was making the BIG mistake in trying so hard to be a respected major independent label, they had completely forgotten the value of it's own name (a lesson that was not lost on Virgin Records, which - ironically - released albums that were far edgier than anything Playboy Records offered.)

But one #1 hit just doesn't keep a record company going and soon, even Hefner lost interest. The label was soon distributed by Epic Records and was quickly folded into Epic by 1978......

Posted by Larry Waldbillig at 6:15 am