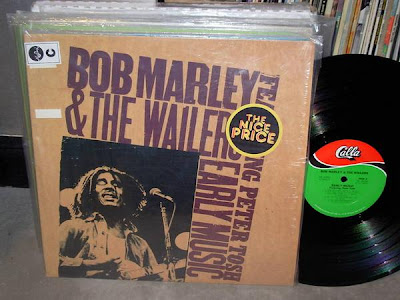 Here's a nifty little compilation of some of Bob Marley & The Wailer's earliest recordings (with Peter Tosh.) Released in 1977 as Bob Marley was making his mark on American FM rock stations and people everywhere were discovering this strange new music called "reggae". Whereas back then, punk was loud, fast and snotty, reggae was the mellow, laid back stuff your stoner next door neighbour played loudly on his stereo every Sunday morning.

While on the surface, this might look like your typical major label budget compilation (Calla was the hard funk/Caribbean music imprint of CBS Records) to cash in on a big trend by reissuing a current superstar's early material, this album is surprisingly well mastered with some instantly catchy tunes ("Wings Of A Dove", "I'm Still Waiting") and excellent liner notes on the back cover.


On this one, you hear more of a '60s soul influence (these sessions were recorded in the late '60s, before Marley's more rock-influenced Island albums in the '70s that made him a superstar) and Bob Marley could have easily scored a few '60s US hits if CBS were actively looking in Jamaica for exciting new music. Which they weren't (NOBODY outside of Island and a few specialty labels were doing that.) These recordings are reissued material Bob Marley & The Wailers recorded for New World Disc Records. It's a necessary companion to Bob Marley's greatest hits album Legend.
And the perfect soundtrack for a Sunday morning.....
Posted by Larry Waldbillig at 12:00 am