The Story Of The Long Playing Record

At the dawn of sound recording, there was a problem: Recording time.

Edison's tinfoil cylinder only played for a few seconds (and sounded, well, like tinfoil.)

The first wax cylinders could only play for a minute. The improved wax cylinders for two minutes (and sounded like wax and incoherent sqwaking.) The first disc records were not much different.

Really sucked if you liked classical music. Because Classical music is LONG. It has subtleties and detail. And it was the biggest genre of music then.

There were experiments to see which of these formats could provide the longest playing time. Cylinders got obscenely longer and wider.

Discs got as large as 20" inches across.

In the earliest days of acoustic recording, there were no microphones or electricity used in recording or playing back sound. So an opera singer would either had to have an INCREDIBLY powerful voice or in some noteworthy cases, SCREAM into a metal recording horn. Some experimenters also tried to slow down the speeds. But with the unresponsive hit-or-miss equipment they had of that time, they didn't have much success.

But there was another factor: Speed.

Speed is crucial in good analog sound quality. The faster a tape or record speed, the better the sound (there's other physical variables, a recording is only as good the source and quality of material it's recorded/pressed on.)

In fact, Thomas Edison made a HUGE stride in long playing recording by 1926 when he introduced the very first attempt at LPs. 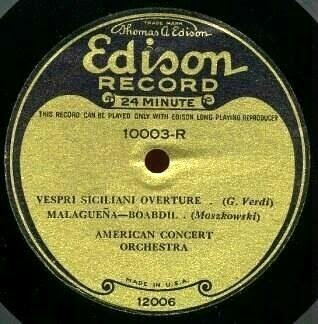 They played at 80 RPM and had grooves even finer than most K-Tel records of the early '70s, which created skips and 'stuck' records far more frequently than wider groove conventional records of that time. But a 12" inch record could play up to 40 minutes and a 10" inch record for 24 minutes.

The trade off however was an impossible one. First, they could only be played on special Edison made phonographs. And Edison himself, who was about 80 years old at this time was his own label's A&R guy. Meaning if he didn't like it, he wouldn't publish it. Jazz was the big music of that time, but Edison himself hated it. Second, they were still acoustically recorded at a time when electrical recording had just become mainstream. And finally, the actual volume level of these records was actually far lower than standard Edison records. 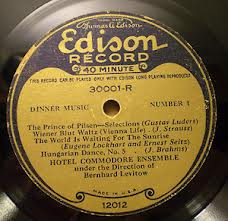 Here is the above 40 minute album in it's entirety:

Many refinements had been implemented, such as finer grooving and electrical recording. With these new advances, RCA Victor decided to revisit the old idea of a TRUE LONG PLAYING record.

There was just one little problem....

You see, when this was unveiled to the public, the public however was smack dab in the worst throes of the Great Depression. It was 1931 and the very LAST thing you were thinking of trying to feed a family - if not just yourself on whatever job and/or help you can possibly get was buying fancy new phonographs.

But RCA Victor whipped out the very first 33 1/3 RPM speed records and players in 1931....And it had promise. The material for pressing these records was a combimation of shellac and vinyl called "Vitrolac". And they weren't called "LPs" or "albums", but "Program Transcriptions" or PTs, a term used in the radio industry of the time (and well beyond), but one that never seemed to catch on with the general public.... 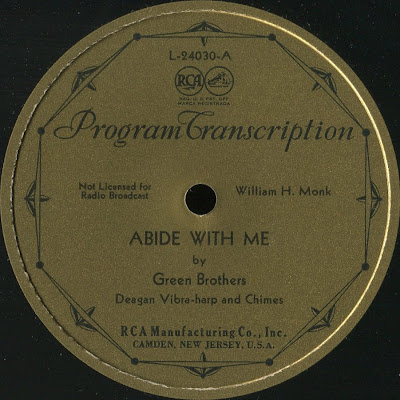 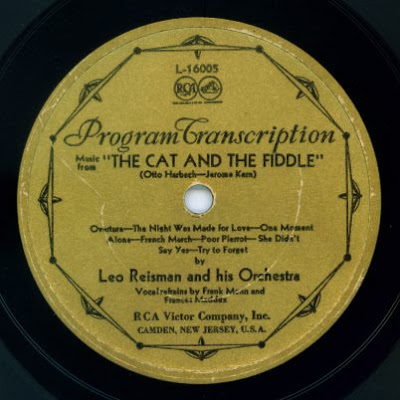 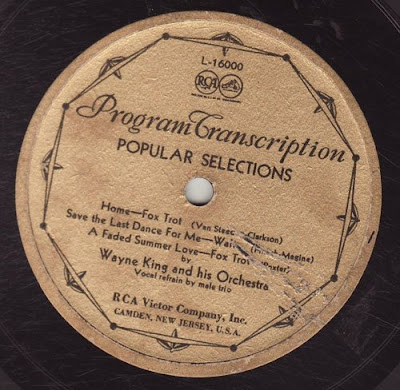 And the new record players from RCA came out:


(Above: This has got to be the most HIDEOUS tone arm of any record player I have ever seen in my life!)

The public response at the time was "Thanks, but, um, in case you haven't noticed this already....." They were too wrapped up in mere survival to even bother with any luxuries.

They were quickly discontinued and very few of these phonographs and PT records remain.

As times got better financially, especially after the war, it was oddly RCA Victor's old rival Columbia that reintroduced the LP record to the general public. MANY improvements had been made to RCA Victor's earlier invention, namely the use of diamond needles and material used in pressing these records (pure vinyl, no shellac.)

A question I've been asked is why didn't RCA Victor pick up where they left off in the '30s? I'm not entirely sure myself, but I think the failure of their first attempt at an LP might have still been fresh in their memories and they wanted to start out with something unique and fresh. The 45 RPM record had it's advantages. And that's probably how they wanted to start out. With something completely different.

Posted by Larry Waldbillig at 6:04 pm