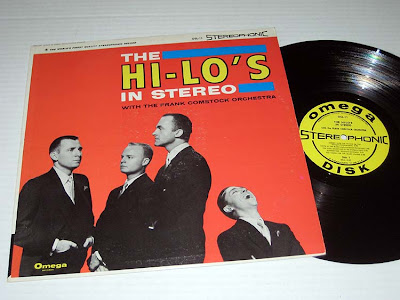 If you don't know who The Hi-Lo's were, you really....OK, I don't know who they were either. And since they recorded for Omega Disk Records, they are guaranteed to forever remain in obscurity. Omega Disk was a budget record label in the late '50s, back when anything with the word "Stereophonic" sold records, no matter how unknown or talented (or lack thereof) the performers were

Not sure what is going on here, we have four guys, three appear to be talking about something that's way out of the league of the little guy on their left. Not that he cares. He's just happily gaping his mouth wide open and that's maybe why the other three decided to keep what they were talking about to themselves. Smart move.

On the other hand, perhaps these three guys are just standing around, slacking off while the other guy was doing the actual singing on the record........
Posted by Larry Waldbillig at 7:19 am