At History's Dumpster, it doesn't have to be old to get tossed in. Pop fads are being created all the time.  There's no reason to make it purely nostalgia. If it were, it would get boring for me as the blogger here. Quickly.

Today, we look at the craze known as "Gangnam Style", an internet meme gone berserk lately. What is it? 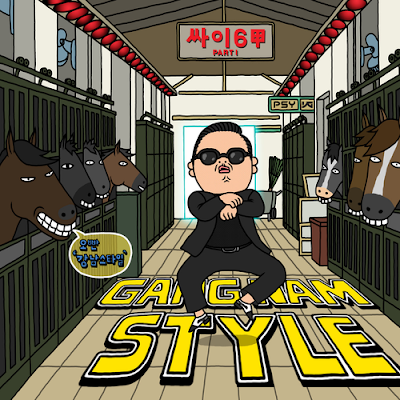 If you've been living under a rock (and with things as crazy as they are in the world, I can't really blame you.) "Gangnam Style" is a video and funny dance by pudgy Korean rap star Psy and currently the fastest rising song on today's Top 40 charts:

Flash mobs doing the Gangnam Style dance pop up everywhere regularly and the dance had been a regular feature of morning talk shows. People everywhere seem to love it, as videos of them dancing to it keep popping up everywhere on YouTube.

And in a way, "Gangnam Style" has finally opened up the door for one of the richest known sources of sometimes excellent undiscovered pop music, known as K-Pop (Korean Pop). But I also worry if K-Pop will be pigeonholed by "Gangnam Style" There's far more to it than just this song. MUCH more. But knowing how the record and radio industry work, they always look for copycats of The New Big Thing and never really dig deeper for the hidden gems, which K-Pop has no shortage of

On the other hand, it could usher in a K-Pop music revolution, Having been a fan for years, it's about time.

Here's one of my favourites from Loveholic, a 2004 K-Pop classic, titled - what else? "Loveholic". It's a pop song sung entirely in Korean, but I like the melody. And the lead singer's hair in lights.....Nice touch.

And while for some people, the bowlegged side to side stepping with arms folded looks stupid. But so does every other dance really. And you have to admit, the song is fun relief in a sea of Justin Bieber, OneRepublic and Carly Rae Jepsen tunes that flood the Top 40 airwaves today.

There will come a time when we'll all get sick of it (some folks already are.) But for now, enjoy it while it's here.