The History of FM Radio

FM radio was invented in 1933 by Edwin Armstrong. It was developed initially as an experiment to solve the problems that plagued AM radio, such as static and skywave interference that morphed into the creation of an entirely new radio transmitting system.

But development was stalled by the Depression, then by RCA and NBC chairman David Sarnoff, who was a friend of Armstrong and later bitter rival who felt threatened by Armstrong's fledgling FM radio network. Sarnoff, who's entire NBC network was built on AM radio and it's use of national radio lines provided by AT&T soon realized a network that could be relayed wirelessly in sparkling clean, crystal clear high fidelity at that time and to anyone could singlehandedly DESTROY his entire empire. Many other AM radio networks such as Mutual and CBS felt the same way. So they quickly cut off all ties to Edwin Armstrong and lobbied the FCC to make radical changes to FM radio, namely to stall the inevitable public reaction if FM ever gained a strong enough foothold.

And then World War II. All applications for new radio/TV stations were instantly frozen. After WWII, the FM radio band was moved from 42 to 50 MHz to 88-106 MHz, then it's present 88-108 MHz band about a year later.

The reason for the move up in part, due to Sarnoff and his compadres lobbying efforts, but also because radio signals below 54 MHz were prone to the tropospheric skip effect, which can cause interference on stations hundreds of miles away on the same frequencies (On the 88-108 MHz, it still occurs sometimes, but much less frequently.) But Edwin Armstrong took the decision as a devastating blow. This meant his few listeners and stations would have to upgrade to newer and expensive equipment just a few short years after he unveiled them. Many of the earliest FM stations did not make the upgrade because of the staggering cost it would make the switch to the new FM band for both his stations and the listeners. He committed suicide in 1954.

The 88.1 - 91.9 MHz portion of the FM dial was specifically reserved for non-commercial, educational interests, such as colleges, high schools and community radio groups.

In the '40s to the early '60s, FM was nicknamed "Forgotten Medium" because in part, the band change. Few people were willing to pay so much money for brand new FM radios and as a direct result, so few people were listening to it. In fact, so few were listening to FM in the '40s and '50s, many AM station owners, who also owned many of these fledgling early FM stations, actually returned their original FM licenses to the FCC!

AM was still the dominate radio band and would be until about 1975. But there was a niche audience for FM, mostly classical music fans and High Fidelity buffs. 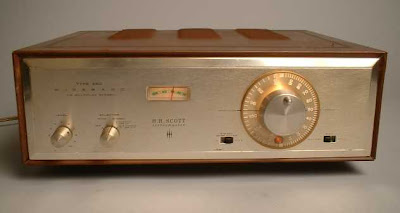 Stereo FM was introduced in 1961 and slowly FM stations began adopting it and FM started gaining a slow, but steady new interest. At the time, most FM stations were still owned by AM broadcasters who often simulcasted their AM programming on their FM stations. The rules were changed in 1966 ending that practice. So these station owners scrambled for alternate programming of some kind. Actually, any kind.

Many went with tape automated Middle Of The Road, classical or instrumental pop radio formats. But others began leasing time to enterprising former AM Top 40 jocks. Who didn't play the traditional Top 40 singles and instead, played longer length album versions of these songs or sometimes full rock albums or non-single cuts from different albums.  They were called free-form rock or underground stations and programmed the stations with a decidedly countercultural lean

And FM finally had new life.

But through the '70s and most of the early '80s, the dominating FM radio format was called "Beautiful Music" (later called "Easy Listening"). These stations often played "cover" versions of pop songs as rendered by orchestras with lush string arrangements, perky trumpet solos and occasional quiet vocal groups. In any given major US city, it was not uncommon to have as many as FIVE stations on the dial with this format on FM radio.


(WJBR-FM 99.5, Wilmington, DE Early 1970s - The music you hear here is exactly what you would have heard on thousands of these "Beautiful Music" FM radio stations around the country in the 1970s)

The rest were classical, jazz and a few, now more commercialized album rock stations. Country and '50s oldies music on FM was still very rare in most US cities.

But beginning in the late '70s, Top 40, Country and more specialized rock formats, including oldies began crossing over to FM and soon FM became the radio band for music. The Beautiful/Easy stations soon began dying out as their listeners aged and became an undesirable demographic in the eyes of many corporate advertisers. And AM radio concentrated on news and talk programming or oldies.

Today, FM itself is sadly becoming obsolete with the advent of online/mobile web music alternatives catering to an increasingly fragmented music audience and the narrowing of music format options by corporately programmed radio chains that cater to the most musically unsophisticated listener, including a dependence on news/talk programming, once the exclusive realm of AM radio.

Add the increasing numbers of "translator" and repeater stations (most of them from religious radio networks such as K-Love, Air-1 and CSN/Effect Radio, who flagrantly abuse the translator loophole that allows non-commercial stations to use satellite, cable or even web-based feeds to relay their programming to areas FAR beyond their main regional areas - usually across the country in most cases.), often causing interference to independent, locally programmed stations and what you get is a noisy, interference filled radio band

A total reversal of what made FM so attractive in it's early rise in popularity.


Posted by Larry Waldbillig at 5:01 am