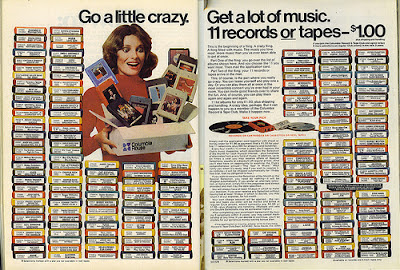 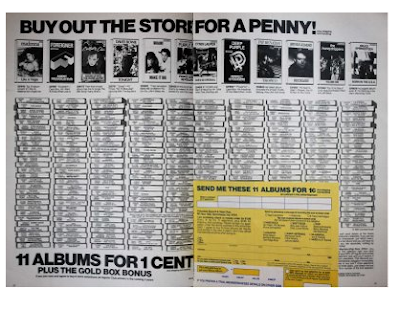 So you wildly lick your chops and tear out the postage paid postcard and madly start writing down the catalog numbers of your favourite albums and your name and address, put it in the mailbox and wait......

A few weeks later, a BIG package arrives and you claim your prize. You're having a great time listening to your audio plunder until a large envelope falls out of the box.

You soon do the math and realize you could have bought twice as many albums for the same price as the clubs asked for.

The Columbia House and The RCA Music Club (later known as The BMG Music Club) had these advertisements everywhere in every magazine and Sunday newspaper and made thousands of suckers customers a week. Most of whom were caught off guard by the bills and the fine print.

The record clubs did have their place. If you lived in a very rural area 60 miles away from the nearest record store, there was no other option. However in larger cities and suburbs, they really weren't necessary.

And the club magazines/catalogs were a joke. The record "critics" really didn't know what they were talking about (the glowing praises for Milli Vanilli's Girl You Know It's True album were a riot.) and the articles were about as shallow as a toddler's wading pool. On top of the fact a new album wouldn't appear in these catalogs for two MONTHS after their retail release.

Worst of all were the "Album of the Month" selections. When you received the monthly catalog, you had to quickly check off the DO NOT SEND ME THE ALBUM OF THE MONTH box QUICKLY and rush the card right out in the mail, meaning you're also being rushed into making an order too if you want it. Or you would get the Album of the Month anyway. You often did regardless. And you would be charged for it as well.

The person in charge of making these "Album of The Month" selections was often the most clueless person on the entire staff. And this wasn't Tower Records either. The selection was limited to the most popular albums of any given artist. About 300 albums were featured each month in the record club catalogs.

The clubs folded with the dawn of MP3 file sharing, which rendered them obsolete. To add to that; In 2000, a New Jersey man admitted he'd opened 2,417 accounts using 16 PO boxes to fleece Columbia House and BMG out of 26,554 CDs!

Posted by Larry Waldbillig at 7:32 am