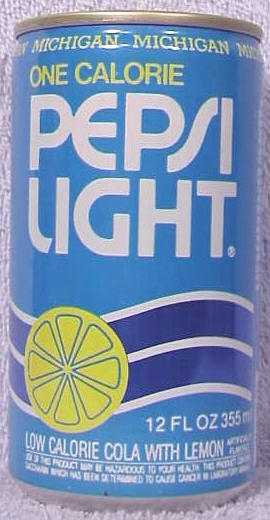 Pepsi Light was a saccharin flavoured sweetened diet soda which came out in the late '70s. It was flavoured with lemon, which was a good thing, but did nothing to overcome the saccharin aftertaste. Pepsi somehow never though of making a regular version of this soda, which I think would have been a much bigger hit.

Later in the '80s, the lemon flavouring was removed for some reason and the product tanked. It was just a poor imitation of their own Diet Pepsi.

Posted by Larry Waldbillig at 7:04 am