The History of The 45 RPM Record

In the late 1940s, record sales were great. The Depression and the war had passed and America was entering a new period of comfort and affluence. Just sit back and relax, Truman was going to take care of everything.

But there WAS one little problem......the records themselves.

Recording technology had changed tremendously since Emile Berliner's first gramophone records in the 1890s. We had gone from unresponsive acoustic recording horns and direct to disc master recording to full electrical recording and tape masters.

But very little had changed with the records themselves. They still rotated at 78 RPM, still made of noisy shellac and extremely fragile.


In 1948, Columbia Records unveiled the 33 1/3 RPM long playing record. It played for about 20 minutes per side and made of thick and much quieter vinyl.

RCA Victor, Columbia's long time rival was also working on a newer and better record at the same time as Columbia. When Columbia came out with the LP record, RCA scrambled on it's own project and in 1949, unveiled the 45 RPM record.


The RCA 7" inch 45 RPM record was cute, VERY small, and RCA's very colourful vinyl (each genre of music had it's own colour of vinyl!) made it an instant hit with younger people. Popular releases were on standard black vinyl. Country releases were on green vinyl, Children's records were on yellow vinyl, Classical releases were on red vinyl, "Race" (or R&B and Gospel) records were on orange vinyl, Blue vinyl/blue label was used for semi-classical instrumental music and blue vinyl/black label for international recordings 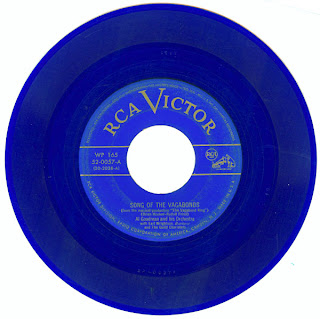 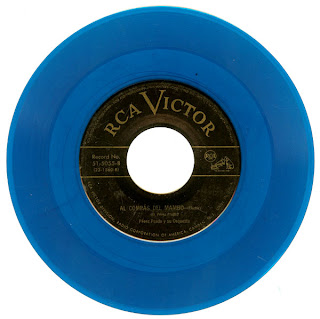 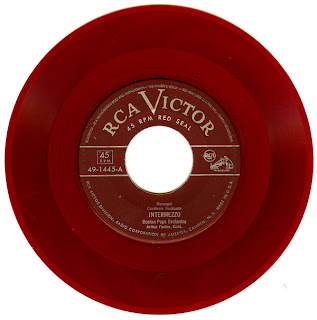 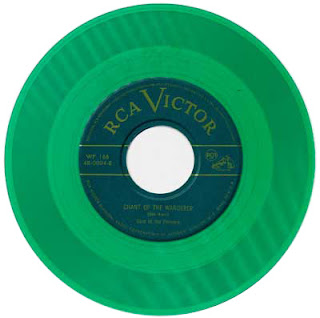 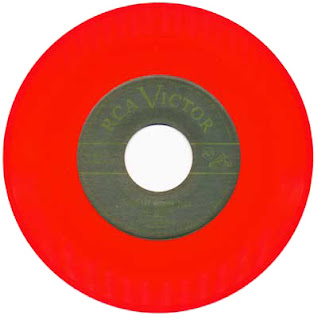 Here's the demonstration record that came with one of these players......


But the 45 RPM record and RCA 45 players DID have a few problems. First, the players could only play 45 RPM records. Nothing else. Second, classical music fans still had to put up with the same mid-movement breaks that plagued symphonic fans since the dawn of classical recording. Something the 33 1/3 RPM record rarely had.

This era in the turn of the '50s was called "The Battle of The Speeds" Some people preferred the 33 1/3 RPM LP, others the new 45 RPM players and old timers who insisted on the 78 RPM speed. The other major labels mostly aligned with the 33 1/3 RPM LP for albums (Capitol however released albums in all three speeds) and 45 and 78 RPM for singles. The 78 RPM single began disappearing in the early '50s and the 78 RPM speed regulated to children's records through hand-me-down phonographs from their parents. The last American commercially released 78 RPM singles appeared in 1959, however they were still made for children's records and older jukeboxes until 1964.

And thus began the era of the 45s. An era that lasted 40 wonderful years. Before the cassette tape, CD and MP3 player, 45s were the perfect portable personal music medium. 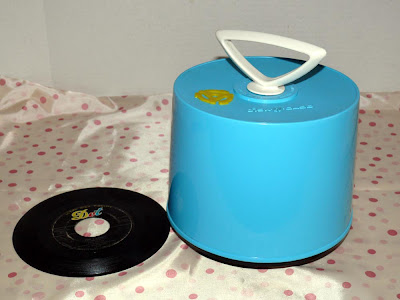 And the 45s themselves were super cheap too, less than a dollar each. Fun to collect, share and trade with friends. While some kids had baseball cards and comic books, others had 45s. Portable battery operated phonographs were also made for taking your music anywhere. 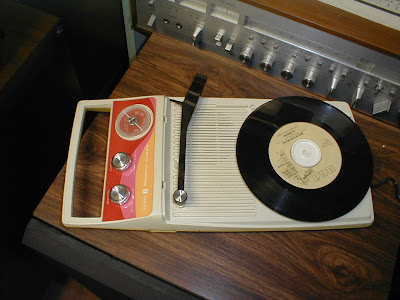 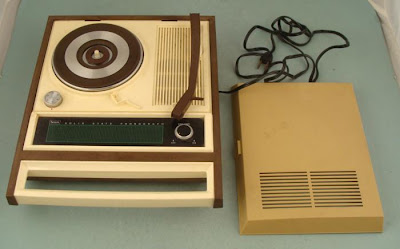 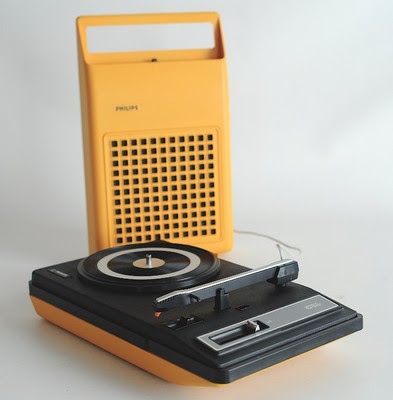 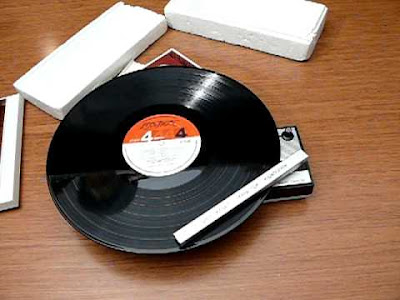 Check this little baby out!


And who could forget THESE?

The very first Stereo 45 RPM record was introduced by Bel Canto Records in June of 1958. 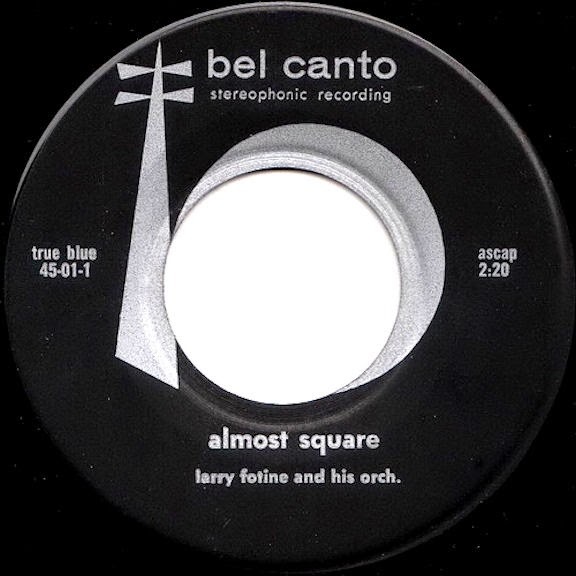 
45s also had the B-side. Most were a second, non-single track from the parent album. But sometimes, it would be a live track, an instrumental version of the A-Side song, an outtake from the parent album session. Or sometimes, a completely original song. Most of the B-sides of Elton John's 45s had songs recorded just for them, as Elton John felt it gave his fans better value for their money. And they did. Most of them are collector's items and many were never released to CD.

There's also been the question of how long can one side of a 45 play. Most 45s run from 2-5 minutes. John Lennon once asked this to George Martin in 1968 and George Martin, after some experimenting, found the answer - 7 minutes, 11 seconds. And thus the playing time of "Hey Jude". 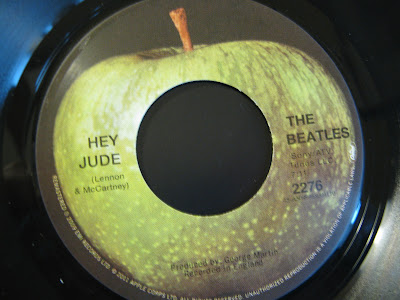 (UPDATE: Thanks to John Cerra for reminding me that "Hey Jude" was actually the SECOND longest pop 45 of the '60s and that "MacArthur Park" Richard Harris was actually LONGER than "Hey Jude" by 9 seconds (7:20) and was released earlier than "Hey Jude". My brain isn't what it used to be. - Larry) 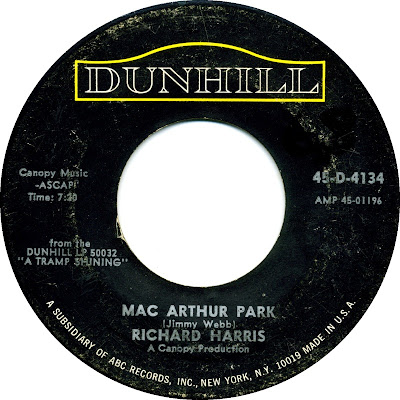 However, this wasn't the longest 45 side ever. That distinction belongs to Bruce Springsteen on the B-side of his 1987 single "Fire", a live version of "Incident of 57th Street". It clocked in at just over 10 minutes (10:03) 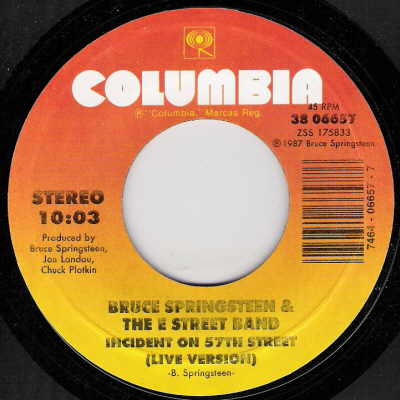 I'm sure there could have been longer. But I haven't seen any.

But that's the fun of record collecting. Just when you think you've seen and heard it all.....Surprise!

By the beginning of the '80s, sales of 45s were beginning to gradually slip as sales of cassettes and blank tape began ushering the "mixtape" era. CBS noticed this and test marketed the one sided single. In 1987, A&M released the first cassette single and other record companies quickly followed suit. By 1990 however, record companies began discontinuing the 45, except for jukebox releases and collector's items. However with the vinyl resurrection of the last few years, many companies are back to pressing vinyl.

But there's something about the 45 that an MP3 simply can't mimic. It's REAL. Just the right size. Something you can hold.

And no matter what next big thing comes along, they'll NEVER go out of style.
Posted by Larry Waldbillig at 2:44 am