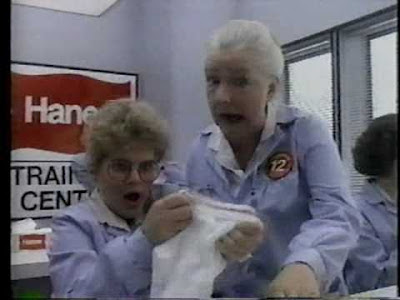 I simply do not know what was going on in the minds of the promotions department of the Hanes Underwear Company that they thought hiring a scary old woman with a boys underwear fetish to promote their products was a neat idea.

And secondly, can you imagine the UPROAR if they got a dirty old man to fool around with the girls underwear like THIS? I mean, what was the difference?

It was violating to look at.

Worse yet, in later commercials she TRAINS other scary old women to do the same thing she does.

Posted by Larry Waldbillig at 10:51 am