I'm not sure if he was to be the vanguard of some new sub-genre of rock called "Muscle Rock" (as been suggested.) And to be honest, I could understand it. Hard rock in the late 70's was still dominated by makeup wearing glam bands like Kiss, Sweet and Alice Cooper. Ballad filled arena rock like Styx and Foreigner. And punk had siphoned off the rest. Heavy metal still didn't even have an official name yet. And Rob Halford still wore jeans.

Thor was a Canadian hard rock band that was to change all that. And it some ways, it did. With presumably 10,000 or so who wore studded S&M collars sold since 1978 and people who would openly or privately wear those things. In a world of nearly 8,000,000,000, it's a hard metric. To say the least*.

(*Please correct me if I am seriously underestimating this and that there is an actual, fairly accurate and somewhat publicly verifiable and relatively undisputed worldwide count to how many studded S&M collars were sold since 1978 to refute my disproof above somewhere in the files of time.

My readers and I would also like to know who keeps the data on something like this too. Because they absolutely think I am crazy enough. They want something even deeper into crazy. And so am I. Thank you. - L.W.) 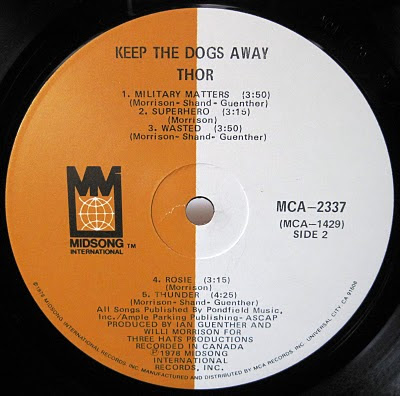 I was given this record in 1979 with a note inside the sleeve that said "Play this at your own risk.". I stared at the cover and blinked. It showed some guy out walking his dogs to my 11 year old eyes. Did those dogs intimidate me? No. As long as you gave them something (else) to eat and pet them nice.

More on Thor plus MP3s of this album here.

Posted by Larry Waldbillig at 3:43 pm