You Think YOU Have A Lousy Boss? 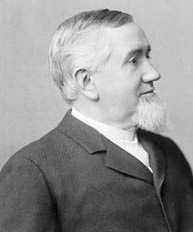 Well, you really wouldn't want to. He's been dead since 1897 and even if you were given the chance, good luck getting past the eight tons of solid concrete and lead over his grave.

There's a reason why they put all that concrete over his grave, and by the time you're done reading this you'll understand why this man was as toxic as anything they bury in at the Hanford Nuclear Waste Dump.

Let's get into the Wayback Machine (could get crowded, so wear deodourant) and time warp back to Chicago in the 1880s.....

Chicago was a booming town. It just got over a massive fire and things were on a roll. it was one of the few major cities in America at that time where you could be black or an immigrant and still find a way to make it.

George Pullman seemed like a visionary and on paper, you'd think he was.

Pullman ran a company that made luxury railroad cars. There were few automobiles in those days and they moved with the speed of the mail. Airplanes were still science fiction. So horse and buggy was the way for people to get around the city. If you wanted to go see your Aunt Sadie in Peoria, well....you'd be going through a lot of horses too. So passenger trains were invented for that purpose and like Greyhound buses these days, they were uncomfortable, cramped, smelly and (did I mention uncomfortable?)

Anyway, enter the Pullman railroad car. This thing was to change all that. It had seats big enough for the American butt of the time (or at least larger than the butt of an average praying mantis.) It was made of the finest materials. It was the first railroad passenger car with a design and function not resembling a maximum security prison. It was even considered stylish (a word a designer of a maximum security prison would hear and grunt at.) Railroad travel really didn't have to resemble a week in the hole anymore.

This was the Gilded Age, and it was luxury over sanity, flamboyant style over basic safety features. It was a brave new world and George Pullman was going to milk every drop of it.

He constructed a company town for his employees called (what else?) Pullman in Chicago. Pullman had everything you could ever want in 1880. It was totally off the grid from the rest of Chicago, it had it's own sewer and water towers, it's own electricity plant, phone system The very first shopping mall in history called "The Arcade". It had a theater, several shops, a public library and a post office. A public school, a grand hotel, several parks, it's own newspaper and a church. Several streets lined with nice little rowhouses for his employees. There was no litter in the strrets, lawns were well manicured. Everything was as neat and tidy as Martha Stewart on speed. There was NO crime, NOTHING could go wrong, right?

Something did go wrong. Like any travel brochure to paradise, you have to read between the lines. You see, when you work for, rent from, get all your stuff from, you kids educated by and live under the same rules by the same guy, there's gonna be a problem.

First, everything was basically on loan. You were not allowed to own your own little rowhouse. Second, FORGET starting any "alternative" to Pullman's status-quo businesses. Your kids were educated in the Pullman way, all books in the public library were carefully selected by Pullman himself, what you saw in that theater - yep, he picked that too. And the church? Well.....NOBODY used the church, as one church and a zillion denominations of Christianity (we haven't even begun to talk about the non-Christian religions) are just too much for one building.

And everybody's house was so spotlessly clean in these rowhouses that looked perfectly alike. That happens when you can be evicted with only 10 days notice for so much as a dirty dish in the sink. Pullman sent goons out to inspect every house to make sure everything conformed....or else.

Now, if you thought things really fell apart right there, just remember his employees were paid not in solid American cash, but in Pullman's own currency. Meaning once you got outside of Pullman and into Chicago itself - SURPRISE! You're worthless. And when in Pullman, watch out for company spies. They were all over the place. They could be your next door neighbour, the nice guy at the grocery store. And if everyone could settle on a religion, the priest would probably be forced to report back to company headquarters with your juiciest confessions. There was no independent press, no town meetings, no public discussion. Nothing.

Naturally, people began having a problem with all that. But you kept your big mouth shut tight....if you knew what was good for you......

In 1894, Pullman began losing business. Things were rough all over as the American economy was in a mini-depression. But Pullman thought he knew which side his bread was buttered on. So jobs and wages were cut. But rent, utilities and everything else in Pullman stayed at the same prices. And things REALLY went to hell. People went on strike - 90% of Pullman's workforce went on strike. And then it really got ugly. Pullman got in touch with a political buddy, one President Grover Cleveland to send in federal troops to squash all dissent.

However, once the smoke cleared, it was revealed Pullman had too much control over everything and he was forced to relinquish his control over Pullman. Chicago quickly annexed it.

He died in 1897. And just to make sure nobody dug up his grave and beat the crap out of his corpse (like anyone would), he asked for all that cement and a lead lined coffin to be buried in, per his burial arrangements. Actually, it was a good thing. At least he'll never rise again with another STUPID idea.

That's why right wing company towns and gated communities work as badly as the most liberal hippie communes. Social engineering is a public matter, not a private one.

And that's how we should leave it.
Posted by Larry Waldbillig at 7:30 pm