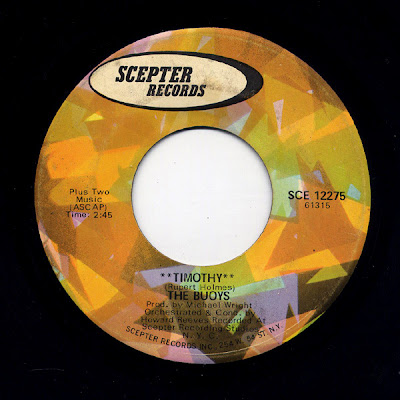 Without a doubt, "Timothy" The Buoys is one of the CREEPIEST songs to EVER make the Top 40.

The Buoys were a pop group fronted by Rupert Holmes (you might know Rupert Holmes better for the super smash at the end of 1979, "Escape (The Pina Colada Song)" and it's follow-up single, the lesser charting lost pop classic "Him".) In 1971 however, Holmes was a struggling 20 year old songwriter desperate for a hit.

Top 40 records need a LOT of promotion. Hundreds of new pop songs glut the airwaves every year and the ones that become the BIGGEST hits usually have a full blown record company promotional campaign behind them. No (or little) promotion means no hit and the kiss of death behind countless failed pop acts.

Rupert Holmes knew this nightmare scenario. But he happened upon a brilliant idea: Make a song that WILL intentionally get banned off the radio. Following the old saying "There is no such thing as bad publicity", Holmes wrote the lyrics of this song:

Hungry as hell no food to eat
And Joe said that he would sell his soul
For just a piece of meat
Water enough to drink for two
And Joe said to me, "I'll take a swig
And then there's some for you."

Well, you get the idea of what happened to poor old Timothy.....

The song was wrapped in a nice, bubblegum coated Osmonds-like musical arrangement and the song was sent out to radio. And radio began playing the song.

At the same time, Scepter Records was promoting their new star, Beverly Bremers who had a new single "Don't Say You Don't Remember" Yet somehow, this strange song the label never promoted was getting an awful lot of airplay.  And a lot of requests from young males at a time when such songs were requested mainly by young females.

The story from here takes a fork in the road. It's been said a Scepter A&R guy desperate to get the Beverly Bremers hit on the radio pulled a radio programmer aside, and mentioned what the "Timothy" song was actually about. Another goes the programmer tried to figure out what was the buzz behind this song and almost crapped himself when he heard the lyrics.

The song however was still selling briskly as a 45 RPM single, so not wanting to upset that applecart, Scepter quickly released a press statement claiming the Timothy in the song was actually a mule.

NOBODY bought that one.

Regardless, the song was quickly removed off many Top 40 playlists (and replaced with the more genteel Beverly Bremers song.)

Nevertheless, this song became one of the biggest hits of 1971. And the radio hasn't played it since....
Posted by Larry Waldbillig at 5:36 pm