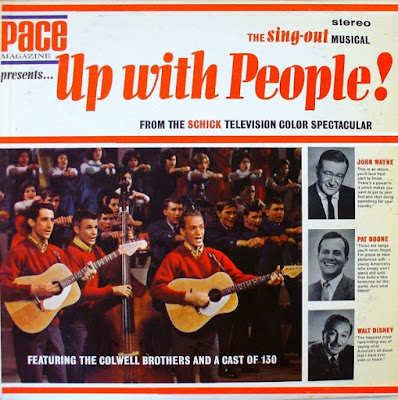 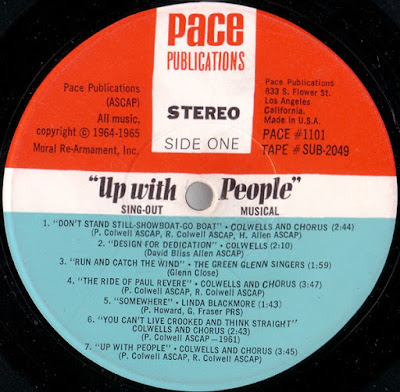 Up With People is a musical troupe that goes around the country (and even the world) trying to bridge cultural differences and create global understanding through public service. And musicals. They released several albums (all including this song) from the 1960s to the 1980s. Actress Glenn Close was a member in the '60s


UWP's incredibly choreographed and cheerful singing and dancing acts were remarkable visually. No sleazy "wardrobe malfunctions", hard rock music, hip-hop or anything remotely disturbing to heartland American sensibilities. They were as threatening as milk and cookies.

But in spite of it as time wore on, Up With People's brand of entertainment had become increasingly stale and dated. Halftime became the time you made a run to the 7-Eleven for more beer, chips and ranch dip. It wasn't until 1987 when they were permanently dropped from the halftime act roster and were replaced by hipper, edgier pop acts and commercials you just have to see.


They returned as the pre-game act in 1991, but that would be their last Super Bowl appearance.

While some people may look at Up With People as some pseudo-hippie musical act about peace, love and understanding, I look at them as just one big, if somewhat creepily happy glee club.


Up With People are now in their 50th year. Not doing Super Bowl halftime shows, but still very much active.