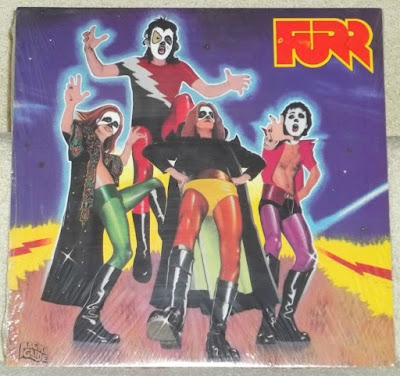 We still don't know. But from the knee-high go-go boots, coloured spandex pants, sequined trench coats and bad face makeup. I'm guessing we're dealing with a "If Peter Criss can do it, we can too!" kind of band.

And from the look and sound of them, that wouldn't be too far off the mark.

Furr comes off like one of those Chinese knockoffs of a famous Western name brand product. And considering 1977 was when Kiss was at the height of their careers and the similarities of Kiss and Furr's logos, it only made one wonder.

This album was produced by legendary bubblegum pop producers Jerry Kasenetz and Jeffery Katz (Ohio Express, The Kasenetz-Katz Singing Orchestral Circus, etc.) for the New York based label Magna-Glide. Not much is known about Magna-Glide either except they did sign '60s R&B singer J.J. Jackson to the label in the mid-'70s and they were distributed by London Records.

But there was just simply no way Furr could ever compete with the stratospheric popularity of Kiss at that time. And this was Furr's only known album.