It's 1985 and you're flipping through the late night TV channels, looking for a late movie or some kind of background noise to do whatever else. And you land on some crazy local UHF TV channel. Which is showing this infomercial.


It's right here you wonder what the hell you are watching. And who (or what) the hell is Santo Gold? Is it jewelry? Some unknown rock star with a penchant for randomly screaming his own name? A factory with a boiler room office? A wrestling federation? A horror movie? A paper bag? WHAT?

I remember seeing this infomercial back then and for decades and even now, adjectives still fail me. But we aren't over yet. Here's the second half of the infomercial.


So here are the basics:

- Santo Gold was cheap steel costume jewelry coated with a microscopically thin coating of gold. People who were considering purchasing these things during the infomercial were encouraged to buy larger sets to sell at flea markets (as opposed at real jewelry stores.) They also came in spools to make custom length necklaces.

- "Santo Gold", the alleged rock star was Santo Victor Rigatuso. The creator of Santo Gold (the jewelry) and financier of an upcoming B-horror/comedy movie called Blood Circus. Rigatuso also went by the less ethnic sounding Bob Harris (are you still with me?)

To my knowledge, there were no known documented studio recordings by anyone named Santo Gold in 1985 or before. Nothing on the Billboard Top 40/Album Rock charts or radio playlists of 1984/1985 refer to Santo Gold (there was an album by Santana, but nothing from Santo Gold.) Which makes his credentials as "rock star" a stretch. And his music ("?") wasn't even rock. From the infomercials, the song he sings sounds like a jewelry advertisement as sung by Disco Tex & The Sex-O-Lettes. 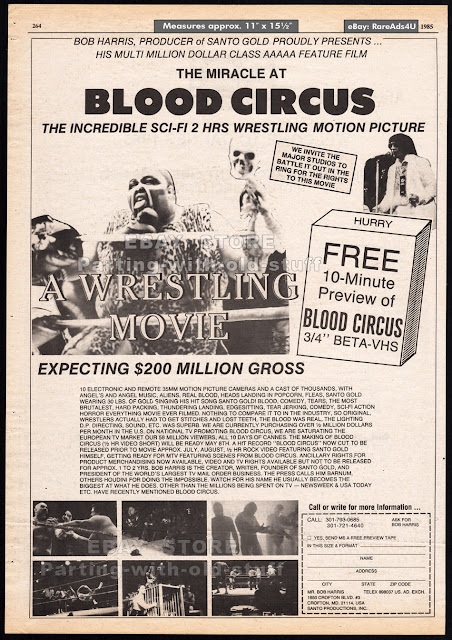 - Blood Circus was the movie that was to spread the Santo Gold gospel to the masses (once the infomercial blitz had paid off, I assume.) The plot was this; Alien wrestlers come to Earth to fight human wrestlers and promptly devour them before defeating them (rather than the more traditional method of defeating them before devouring them.) The movie was filmed at Baltimore Civic Center (now Royal Farms Arena) and was billed as a wrestling event and movie filming. The audience actually had to pay $10 each to attend. Some bit-part actors were actually paid off only in Santo Gold jewelry!

We don't know much more about this particular mess beyond that. We honestly don't. There are no known copies of the film and what known footage exists only on the scratchy, pixellated YouTube videos of the infomercials.

Some money from the jewelry came in. But by 1987, he still hadn't found any distribution for Blood Circus. He could have also gone straight to the then very lucrative VHS home video market with Blood Circus (which would have been perhaps the best alternate route.) Rigatuso did not. Finally, there was a showing for one week only at selected Baltimore area theatres. But according to one source, only three people showed up; Two reviewers and an extra from the filming.

When Blood Circus failed to get anywhere. Rigatuso later went into finance with a paper credit card for $49.99. Redeemable only for the Santo Gold jewelry he was probably still up to here with by then. He later began advertising alleged $2000 chunks of a millionaire's estate for an unbelievable $52 each.

I guess it was unbelievable, as he was finally convicted of mail fraud in 1989 and sentenced to 10 months in prison. That would be the end of the whole Santo Gold fiasco, right?

In 2008 he finally recorded that elusive album we never saw in the '80s, titled I Am The Real Santo Gold. (No word from Slim Shady - aka Eminem.) One of the songs was a tribute to Donald Trump ("You're Fired") and another was titled "Obama Stomp".

In 2009, a female pop singer named Santogold was forced to change her stage name to Santigold, due to legal pressure from Rigatuso.

And then there was this. 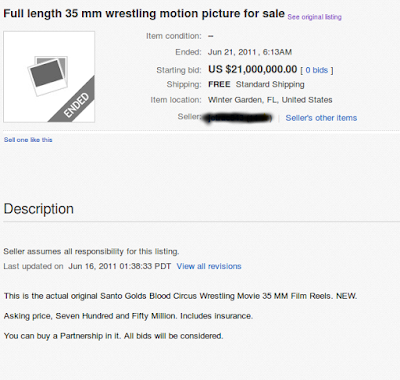 There was an ad that appeared on eBay in 2011. The ad was selling a 35mm film copy of the Blood Circus movie. And starting bid was $21 million. Reserve price? $750 million.

Let's simplify this; The 1997 movie Titanic and one of the biggest grossing movies of all time costed $200 million to make. Blood Circus reportedly costed $2 million.

So until there is a complete, viewable and verified print of this film (and expectations considerably lowered.), the legend of Santo Gold's Blood Circus will only remain in cheesy '80s obscurity.

Santogold (Official Website)
Posted by Larry Waldbillig at 3:16 am