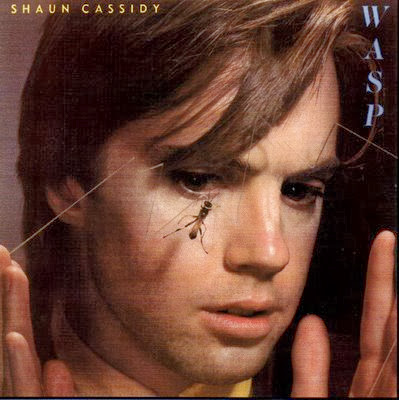 Shaun Cassidy's music career had already been on the skids when this album came out. But this is the only album I know of that actually appeared in the $1.98 clearance racks on the day of it's release.

Wasp was supposed to be Shaun Cassidy's remarketing as a New Wave act. And to add to those alt-y credentials, the album was produced by Todd Rundgren and Rundgren's backing band Utopia also backed Cassidy on this album.

The warning sign was the first single, "Rebel Rebel" - a cover of the David Bowie classic was released to radio. I remember hearing this song and laughing because it was so hilariously BAD. Halfway during the song, the DJ broke in and said "Uh, look. I'm sorry but this is bad. The phones are off the hook here and I'm more accustomed to my listeners saying 'play it again' than 'get that off the blanking air'!"

Not even Todd Rundgren could save this.

So a week later on my shopping trip to the record store, I picked up some albums and 45s and to round off my night, I looked for something in the "budget bin" and there it was. This album. Around 20 copies of it.

So I bought one. And if you thought this was crazy, wait until you hear the title track. And the cover of "Once Bitten Twice Shy" made me appreciate Great White's ghastly version 8 years later. I can't remember what happened to my copy of this album, but I think I finally used it as a make-do frisbee on the beach.

I knew Shaun was aiming for something here on this album, but whatever it was, he went too far above and completely beyond it. I was actually craving "Da-Do-Ron-Ron" or "Hey Deanie" before it was over.