The Night That Disco Died


34 years ago tonight in Chicago, Radio DJ Steve Dahl of Chicago rock station WLUP put a glorious end to the disco music craze of the '70s called "Disco Demolition Night" when he and another DJ came up with the idea of the Disco Demolition at Comiskey Park on July 12, 1979. Dahl, who was never a fan of disco had been fired from rock station WDAI-FM 94.7 the previous Christmas Eve when that station changed it's format to All Disco.

That was the last straw. This meant war.

Dahl was hired by WLUP almost immediately and the anti-disco backlash had officially begun.

Fans who brought a disco record to the ballpark this night 34 years ago were admitted for 98 cents, a number which closely matched WLUP’s 97.9 MHz dial position. The event took place at Comiskey Park between games of a White Sox/Tigers double-header. Early fears of embarrassingly low attendance were squashed when 90,000 disco-haters converged onto a stadium that held 52,000.

After the Sox lost the first game 4-1, during which time the increasingly rowdy fans got drunk and crazy, the real fun began. Steve Dahl wore a combat helmet and rode around the ballpark in a Jeep. In center field a giant box was packed full of disco LPs and blown up which left a hole in the playing surface. People who didn’t get their Village People, KC & The Sunshine Band and Sister Sledge records in the box used them as frisbees and began flinging them through the air. Thousands of fans then swarmed the field, lighting fires and starting small riots. The bases were stolen, the batting cage was destroyed and chaos ruled. Chicago police in riot gear finally cleared the field which was so badly damaged that the second game could not be played. It was later determined that the White Sox would have to forfeit the game to the Tigers because they failed to provide acceptable playing conditions.......

After the Disco Demolition Night promotion, disco began to lose its popularity. Rapidly.

Steve Dahl on the other hand still worked anti-disco sentiment, even producing a parody record of Rod Stewart's "Do Ya Think I'm Sexy" (one of the first ever "parody" type records which "Weird" Al Yankovic would later become famous for) called "Do Ya Think I'm Disco". He recorded it as a single on the independent Ovation Records label (one of the smaller national indie labels of the time that was based in Chicago.) 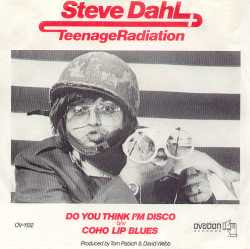 As for disco, it had completely left the pop charts by fall of 1980. It was replaced by an even more tedious form of music called "adult contemporary" and acts like Barbara Streisand (one of the very few acts to have disco hits and survive the backlash) and Neil Diamond began filling the airwaves along with the arena rock bands (Foreigner, Journey, Rush, Loverboy, etc, etc.)

However, disco never REALLY died. It went back underground to the gay dance clubs and R&B charts where it started for most of the early '80s and resurfaced as pop with the Madonna craze of the mid-'80s. It exists today as a specialty genre simply called "dance music". A brief nostalgic revival in the '90s of '70s disco brought a lot of the older music back into the mainstream......
Posted by Larry Waldbillig at 12:05 am