In 1973, K-Tel International got into the board game business with this cool little offering.


Players are rock stars and collect gold records to win. Roll dice to spiral in the player counters from the start to end square on the board. Squares have events for players to collect or lose money or release an album, which may turn out to be a hit, a dud, or break-even. Game comes with a 45 RPM which must be played when any album is released. A random track determines the success of the album.

Granted, K-Tel never signed an actual exclusive recording contract with anyone, they licensed the music for their compilations from major record labels. 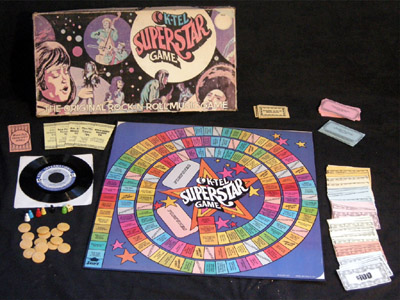