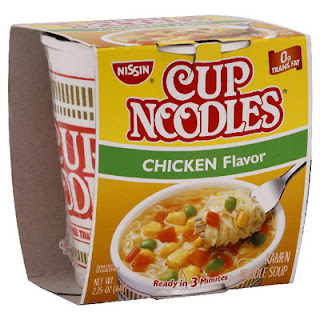 There isn't a more perfect instant food in the world than Cup Noodles.

Formerly known in the USA as Cup O' Noodles, this tasty noodle soup has kept everyone from latch key kids to college students to bachelor guys from starving for nearly 40 years. As easy to make as tea and unlike it's pot made counterpart, Top Ramen. Cup Noodles requires only one utensil, a fork (and even that's solved by picking up plastic forks in the salad bar of the supermarket.) In Japan, plastic utensils are often provided

For me, somehow Cup Noodles even TASTE better than Top Ramen.

And speaking of taste, Cup Noodles around the world have some pretty exotic flavours with Singapore having the most variety, including Spicy Black Pepper, Chicken Satay. However, Germany has it's own flavours, such as Broccoli and even Mashed Potato. The Phillipines have Batchoy and Mexico has Tapatio (hot sauce) flavour. In Indonesia, they have a flavour called Tominapple. Not quite sure what that is.

Bon Appetit!
Posted by Larry Waldbillig at 12:00 am