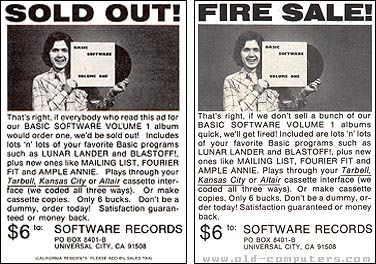 "In July 1977, Software Records launched the first issue of its BASIC software collection recorded on a 12" vinyl record. User could directly transfer programs from its record player to its computer or tape a copy. Sadly, as soon as the vinyl record had a tiny scratch, recorded programs were unreadable.


The first advert (left) was optimistic: "If everybody who read this ad would order one, we would be sold out!"

The second advert came out three months later, it was like a S.O.S.: "If we don't sell a bunch of our BASIC Software Volume 1 albums quick, we'll get fired!".

Were they fired? One thing for sure: Basic Software Volume 2 never came to life..."