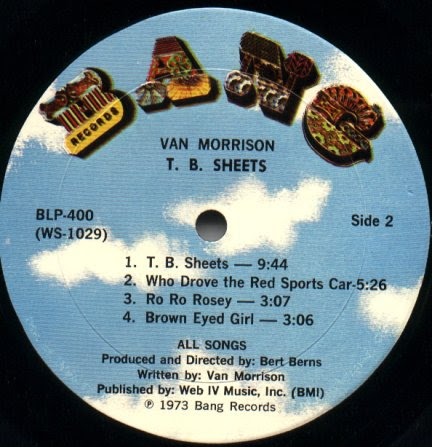 You know Van Morrison by some classic albums he made in the late '60s/early '70s, Tupelo Honey, Moondance, Into The Mystic, Astral Weeks. It was these four albums that had some of his biggest hits and no self respecting Adult Album Alternative format radio station would take to the airwaves without them.

But prior to these classic albums, he was under contract to a tiny US indie label called Bang Records, originally a kind of stepchild label of Atlantic Records that had no direct tie to Atlantic. He still owed Bang another album and Van, to say the least, was tired of Bang Records, whom he felt was stifling him creatively. Like Bang's other big artist back then, Neil Diamond, Van Morrison also left Bang because of the label's interference in his career direction, Bang wanted more cash-cow, pop radio friendly hits from Van Morrison like "Brown Eyed Girl", Van wanted something more.

In one of the best examples of How To Do A Contractual Obligation Album To A Crappy Record Label 101, Van got the last laugh by recording some 30 tracks with titles like "Blow In Your Nose", "Nose In Your Blow", "Ring Worm", "Freaky If You Got This Far" "You Say France And I'll Whistle" and "I Want A Danish". It was clearly intended to be a middle finger to Bang Records.

It worked. Bang let him out of his contract. Warner Brothers snapped him up and the rest is history.....

Posted by Larry Waldbillig at 4:04 am