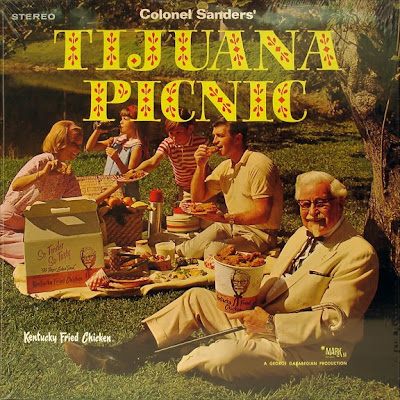 I didn't know where to categorize this. Under Food, Restaurants or Music. Well, it's a little of all of the above.

Could you think of two things that could be more further apart than Herb Alpert-like brass music and Kentucky Fried Chicken?

Before these unholy Taco Bell/KFC combo restaurants started popping up everywhere (do these corporations even know that when you're really in the mood for Original Recipe, the LAST thing you want to smell is greasy tacos and vice-versa?) and bizarre things like chipotle started showing up on KFC's menus, such a union meant automatic BANKRUPTCY to whoever was serving it. And rightly so. Leave the fried chicken and the faux Mexican food to the specialists. And keep them separate.

Of course some whiny corporate suck-up will say "But think about it; let's say mom and dad wanted KFC food and the kids wanted Taco Bell food. Wouldn't it be great if they could each have what they want under one roof?"

And then people wonder why kids are so spoiled today. Because when I was growing up, eating out was a TREAT. And a RARE treat at that. We NEVER argued or complained about where we were going to eat because ANYTHING was better than ANOTHER night of meatloaf.

I could sympathize with the Colonel when he said two years before his death in 1980 that he wished he never sold Kentucky Fried Chicken. I wish he hadn't either. You just don't know heartburn until you had just eaten strips of Extra Crispy and chipotle sauce in a gummy tortilla, no matter how much lettuce and cheddar cheese shreds they put in it.

But let's go back to the late '60s and this vinyl gem. I don't know how exactly it was distributed, but seeing as it was on Mark 56 Records (a company that specialized in producing custom albums for businesses to be sold cheaply or just given away as a loss leader for another product) it was probably given away with a bucket of chicken or sold for 98¢.

It's a generic album of trendy Tijuana Brass knockoffs (that sound was HUGE in the '60s) that corporate America was pushing on every supermarket sound system and FM radio station they could for middle class suburban moms of the late '60s who wanted to be hip, but didn't want anything to do with pot (and ended up alcoholic instead.)

I especially love the liner notes the Good Colonel wrote on the back of this album. Who would've known he was as much an expert on Latin-tinged pop jazz as he was pressure cooking chicken?

Actually, he wasn't. They were ghost-written. But he sure knew how to sell Kentucky Fried Chicken..... 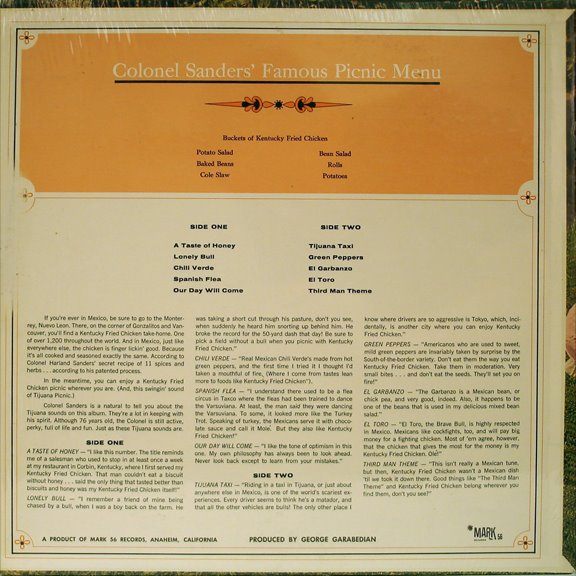