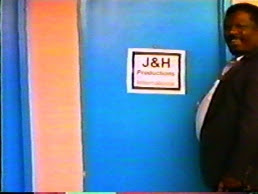 The entertainment industry is a rough business. But it's not what you know that matters, but who you know. That little fact is pretty intimidating to upstarts in all areas of the entertainment business.

That being said, let's say you're not trying to be a star, but taking the presumably easier route of concert promotions. Again, it's not what you know, but WHO you know.

This guy....well, I don't know what he was thinking. All I know is he doesn't seem to have ANY experience in concert promotion - certainly not on the stratospheric levels of the stars he's courting. Yet somehow, he's ready to do the job for people like Dolly Parton, Kenny Rogers and The Oak Ridge Boys.

In fact. I don't even know what he is even talking about two minutes into this recording he made for some record labels somewhere in 1981 or early '82 (I'm guessing because that's when all the stars he mentions were at the peak of their careers.) He talks about his "company", J&H Productions...at length....a full 13:30. But offers no specifics of his company. Any credentials? Well, he got a brochure from the Cavalcade of Stars. And apparently, he doesn't understand receiving that brochure was likely the record company's sublime way of letting him know they already HAVE a concert promoter.

And a rejection letter from Quincy Jones. But you have to appreciate his tenacity.

This tape somehow got salvaged from the trash can of some label giant and had been dubbed and sent to other people in the entertainment industry over the years. I first heard it in the early 1990s and it was like the aural equivalent of an out of body experience...WHO was this guy? And WHAT was he thinking? Could he not make a simple cover letter, info packet and business card, instead of a meandering cassette tape of his proposals? This recording had been saved by WFMU and you can hear it at the link below

Well anyway, have a listen to this tape. TRY to keep up with him...and every tangent he goes off of.......

And just COUNT how many times he says "Pertaining to...." (MAN! Get a Thesaurus!)

Yes, it's even on MySpace: