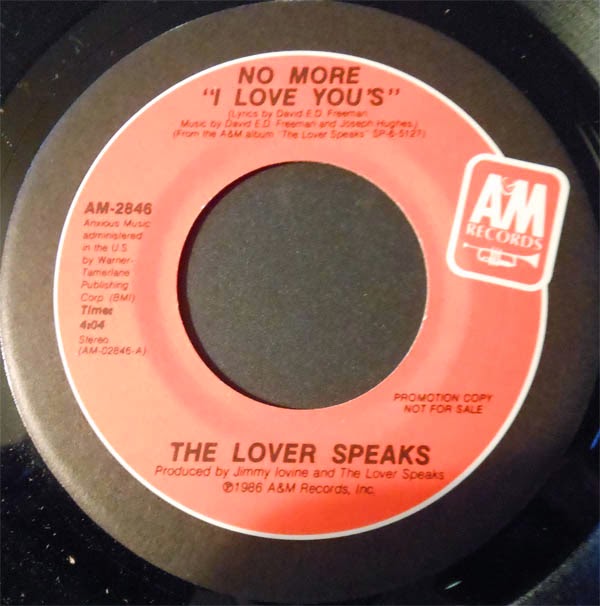 Betcha thought it was an Annie Lennox song all this time, didn't ya? ;)

Don't worry, you're in good company. A lot of people don't know about this lost gem. Or who The Lover Speaks were.

The Lover Speaks were a New Wave duo from England, made up of two former members of the punk band The Flys, David Freeman and Joseph Hughes. Their self-titled first album The Lover Speaks was produced by Dave Stewart of Eurythmics and the duo were the opening act on the Eurythmics world tour of 1986 for their new album Revenge.

Sadly, the poor sales and chart performance of their first LP led to A&M Records dropping the duo after completing their second album The Big Lie in 1987 (again with Dave Stewart producing.) The Big Lie as far as I know remains unreleased to this day. And The Lover Speaks disbanded.

However, their partnership with Eurythmics paid off handsomely nine years later in 1995 when Annie Lennox covered "No More 'I Love You's'", and made it the lead single on her Medusa album. It became a monster worldwide smash hit and the biggest solo hit of her career.


David Freeman went on to a solo career in the 1990s and is currently retired. Joseph Hughes became a producer and songwriter and is currently active today.
Posted by Larry Waldbillig at 4:39 am