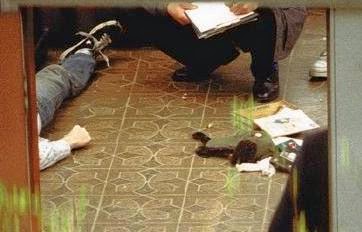 It was another ordinary Tuesday morning, not unlike this one in Seattle....

I had just woken up to my phone ringing. "Hello?"

"Haven't you heard? They said they found a body at his house and he's been trying to kill himself. Turn on the TV."

I turned it on and KING-5 had an image through a TV camera crew on a chopper flying over the Cobain property in the Leschi neighbourhood of Seattle. And my heart sank, as those of millions around the world. Even though his body had been in that loft above the carriage house on his property undiscovered for three days, it was 20 years ago today we heard the awful news.

For the next few days, it seemed like everyone was in a daze. It was in a way like deja vu. It reminded me a lot of how it looked after John Lennon was assassinated. Many were just speechless. And while some were quick to disregard Nirvana as just another dubiously talented garage rock band that somehow got lucky, they were often older people in their insular, status quo world of classic rock oldies who were oblivious to the fact that the whole world of rock had changed in just the past three years. Or who spearheaded that change. Something they should have been acknowledging with all due respect, rather than dismissing so abruptly.

Two days later, I attended the memorial for Kurt Cobain at Seattle Center. It was a very surreal event. Some fans crying inconsolably, others laughing and in a party mood. I was given a candle at the gate (one of those emergency candles, although I had a crystal tea light candle holder that resembled a mountain. I guess not only to metaphorically represent his struggle if not to overcome his personal demons. Then to be accepted, warts and all. But it was also the only candle and candle holder I had at the time.)

But one thing I will never forget, nor forgive, was Courtney Love's address that was broadcast unedited to those on the radio and on all three stations and the Seattle audience of his grieving fans at the memorial.


Yoko One never addressed John Lennon's fans this way after his assassination. Yes, Courtney had just lost her husband in the worst possible way imaginable and I can sympathize with her pain and most of all, her anger at the fact that he did it. But by no means did it excuse her from addressing his fans this way. A few might have shrugged it off, but most didn't. I'll never forget the guy just in front of me with a video camera. He was crying so hard when he heard "...some of this is for you and the rest is none of your fucking business" on the tape, he could barely keep his camera steady as he dried his eyes on his shirt.

I only hope she's learned by now, if there are some details you do not want to disclose, don't mention them in passing.

But the death of Kurt Cobain became the death of grunge rock. From that point on, grunge began losing out to electronic, the Nu-Rock rap-metal hybrid the brought us Korn, Limp Bizkit and Linkin Park and while the echoes of grunge still ring in any Muse ringtone out of some dude's cell phone today, you can never take away what Kurt Cobain brought to rock n' roll.

And that is how we should leave it.