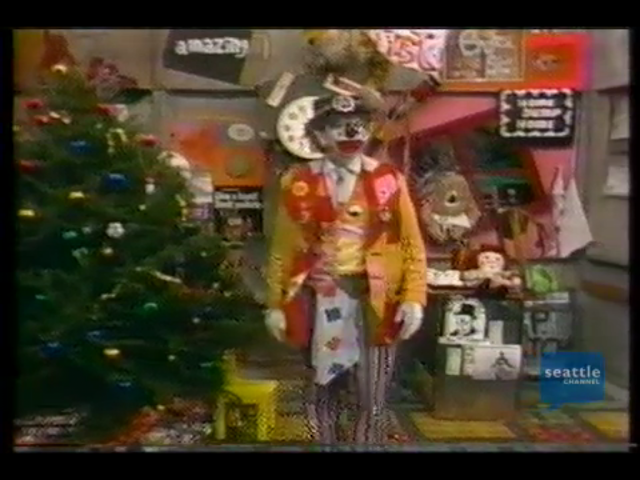 Growing up in Seattle, we had some of the very best in kids programs on local TV. KIRO-TV Ch. 7's J.P. Patches, KING-TV Ch. 5's Stan Boreson, KOMO-TV Ch. 4's Captain Puget and KTNT-TV (now KSTW) Ch.11's Brakeman Bill. In the '60s, all four programs competed against each other, but it was always a friendly rivalry.

While all groups of kids had their favourites, the perennial and longest running was J.P. Patches. After J.P. Patches' show ended in 1981, JP would host specials and pledge drives for public station KCTS-TV Ch. 9, featuring rare archived clips of his show. But he ALWAYS paid tribute to his competitors in every one - VERY classy.

This is a special which ran on The Seattle Channel (the local Seattle public access cable channel, made sometime in 2009/2010 I guess.) bringing together J.P. Patches and Stan Boreson and playing episodes of their classic Christmas shows.

In "How Santa Got His Elves (More Or Less)" the King of The North was played by legendary KIRO-TV sportscaster Wayne Cody....

Enjoy!
Posted by Larry Waldbillig at 2:24 am