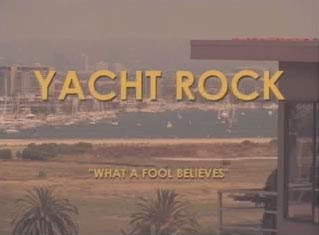 In the late 1970s and early '80s, the airwaves were filled with a certain vanilla latte type of music nobody really had a name for back then.

And it wasn't necessarily limited to any one subset of bands and artists. Although it always had a core of artists that tended to appear on each others albums - namely Michael McDonald, Steely Dan, Kenny Loggins and members of Toto. But many other major pop acts of that time period are guilty of contributing to it in some way. Including Elton John, The Bee Gees, The Eagles Fleetwood Mac, Barbara Streisand, Cliff Richard and Smokey Robinson.

But thanks to a later generation of lovable hipster music fans (they just get it. don't they?) This music finally has the proper name those of us who actually grew up in the era of this music never really had for it; Yacht Rock.

Yacht Rock was what was left when you removed the Anne Murray, Barry Manilow, Melissa Manchester, Neil Diamond and the rest of the torchier ballads and disco crossovers from the then-current Adult Contemporary radio playlists of that period.

Yacht Rock is also the name of a hilarious 2005 internet mockumentary series about this era of music. Originally made for internet video site Channel 101, the series is one of the most popular online video series ever and was the subject of a June 2015 article in Rolling Stone. And the source of the very name Yacht Rock.


Yacht Rock as a genre also connotes a recurring theme in the lyrics and album covers of these songs, usually about sailing. But also the fact that many yacht owners simply loved laid back, easy going pop music when out for a sail (and that's not a stereotype. Having some friends who are yacht owners on Puget Sound and sailed with them on day cruises, I can testify to this.)

And Yacht Rock today has made a comeback, mostly by way of the internet series and younger music fans rediscovering these old songs and the artists behind them (the resurgence in vinyl LP records in the last decade to today has also contributed.) But also in the fact that this was once the most familiar type of music on the radio for two decades. And the older fans really miss it.

And I confess, it's a guilty pleasure for me too sometimes....
Posted by Larry Waldbillig at 12:00 am