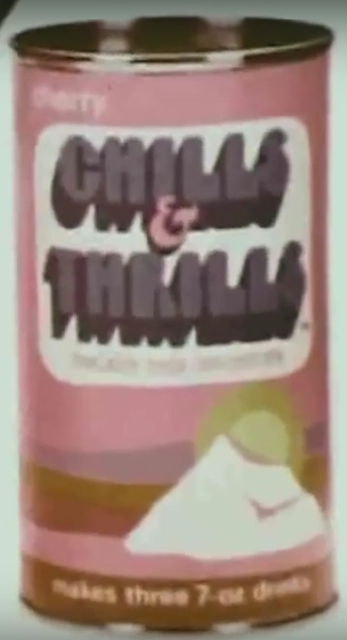 Chills & Thills was a cherry and orange flavoured (artificially of course) frozen soda concentrate made from 1967-68 that was apparently targeted to those hip young people that were probably influenced by Timothy Leary. Or wanted to be.

You mixed it with tap water, which made it fizz into a thick foamy (and judging from the film degradation on these commercials, possibly psychedelically bright coloured) goo you ate with a spoon.....

....and once you hit brainfreeze, you begin acting like this lady.


Sodaburst was a frozen instant ice cream soda fountain drink made from 1963-64. It came in four flavours. All chocolate, "Black & White" (chocolate syrup and vanilla), Strawberry and Pineapple. Plus a scoop of vanilla ice cream in each one. Just add tap water.

The problem here likely, as mentioned in the TV ad, was the price. If it was too pricey, mom was not buying it. And chances are, it probably didn't taste very good.
Posted by Larry Waldbillig at 7:13 am