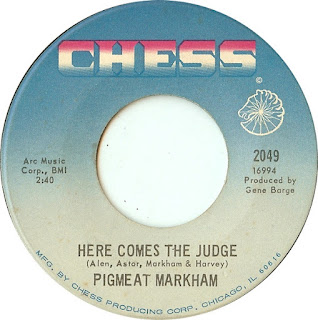 Whether or not this is the very first ever true rap song, a jury of hip-hop scholars will probably forever be out. But this is widely considered to be the earliest known prototype of the genre.

Dewey "Pigmeat" Markham (1904-1981) was a vaudeville comedian in the 1920s and '30s, later moving into acting and singing. He got the name "Pigmeat" from an early act of his, where he declared himself as "Sweet Poppa Pigmeat".

For decades, Markham's career was severely limited to only nightclubs and theatres that accepted black entertainers called the "Chitlin' Circuit", as Jim Crow racism and segregation was still dominant in every aspect of American life in those days. He was little known among white audiences until the 1960s when Pigmeat Markham released several comedy albums that crossed over.

Sammy Davis Jr. performed the "Here Come The Judge" act on Rowan & Martin's Laugh-In. The success of Sammy Davis Jr.'s rendition of Markham's act later got Markham himself a deal to appear on Laugh-In for one season. The success of which spawned this single, which made it to #19 on the Billboard Top 40 charts in 1968.

Posted by Larry Waldbillig at 2:18 pm