Happy St. Patrick's Day......Of which would NEVER be complete without a mandatory playing of this classic. Which was written by the late Shel Silverstein (who also wrote "A Boy Named Sue" for Johnny Cash and "Cover Of The Rolling Stone" and "Sylvia's Mother" for Dr. Hook. As well as the classic children's books The Giving Tree and A Light In The Attic. I should write a post on Shel Silverstein. He's far more prolific than you might have ever known....) 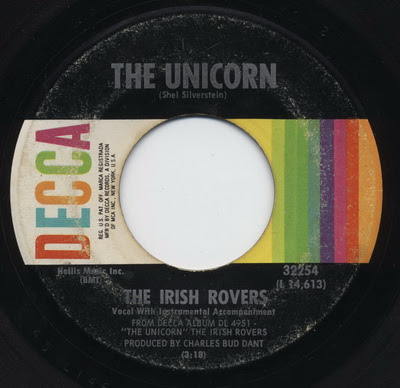 The Irish Rovers were an Irish folk band by way of Canada. They had several Canadian variety TV shows and specials. But very few other American radio hits. Their last appearance on the US charts was in 1980 with "Wasn't That A Party", by this time the band credited themselves as simply The Rovers.