A little plastic thing that looked like a giant M&M with eyes. It was for kids to transport written messages to each other using the kindness of strangers. The kids would write the address of their receiving friend on the bottom of an Oobi and leave it out anyplace someone would find it. And, assuming that person had nothing else to do, would presumably take it directly to the kid who was to receive it. 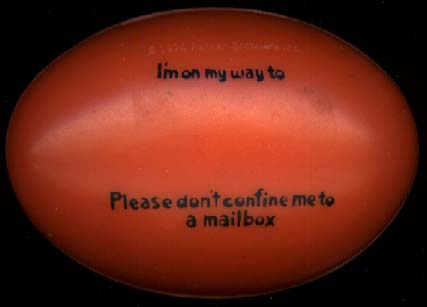 That was the idea at least behind the Oobi.

They were sold in packs of three, so they were probably weren't reuseable.

"oobi is a message center for conveying your written thoughts to other human beings. oobi has no home, no owner, but is forever going somewhere, on his way, in transit, never dying. oobi counts on the kindness of strangers to journey him towards his destination, but only the person to whom oobi is addressed may open him. When he is finally broken open, it is only to free oobi's spirit.

You may buy oobi, but you never "own" oobi. You buy oobi to make him free.

Parents however weren't as nice to Oobi. And this weirdo hippie 'love' babble only made them extremely nervous (or seriously pissed them off.) And you can't really blame them. They had every reason in the world not to like them. Even in that more innocent age, the very last thing you want is some pervert or creep knowing you and your child's address. The slits that held the notes were also big enough and useful for making your kids unsuspecting drug mules as well. So cops were naturally suspicious of these things as well.

It was the biggest toy failure in Parker Brother's history. And they were off the shelves within months.....

More on the Oobi here: