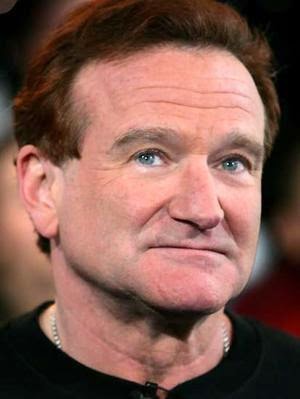 I've never came forward with this publicly beyond my inner circle of friends and a few family members. But the suicide of Robin Williams yesterday hit just a little too close to home.

And I have a confession to make; I suffer from chronic depression with suicidal tendencies with Post Traumatic Stress Disorder and anxiety. (I also have Asperger's and Cogan's Syndrome.)

There. I've said it.

It's not easy to come clean with any kind of mental illness. It's like a gay person publicly coming out of the closet. You just don't know what to expect. Will people you've been very close to begin avoiding you? Will they try and overcompensate for any perceived wrongdoings on their part (which is just as disturbing as avoidance.)

Or will they begin to take advantage of you, mock you, condescend you and use what you are as a weapon against you? Or in more egregious cases, to take control of you?

Having lived with this since I was a teenager (although I remember having symptoms, including suicidal thoughts as young as 5), it's nothing you just "get over".

Everyone has problems. Everyone hurts. But most people bounce back and carry on. People with depression cannot do this without therapy, if at all. They live with a low self-esteem, and a constant feeling of hopelessness and worthlessness that cannot be overcome by personal achievements, success or popularity. For me, it's life behind two-way glass. You know others see something remarkable in you. But you don't. You just see a reflection of the same person you wished was never born.

Robin Williams is an example of this. He was one of the most successful, popular and beloved comedians in history. He had everything. He could do whatever he wanted. But he still couldn't do what most people take for granted and that's feel it within himself. Money can't buy that. And there's no magical "happy pill" for it. If there was, I'd be eating those things like popcorn.

I fought back tears all day today. Because I saw so much of myself in Robin. Because we both used a sense of humour and a happy-go-lucky personality to camouflage the real person underneath that thick veneer. We wanted to be understood, but afraid of what would happen if someone doesn't. Or even if they actually did.

I take several pills daily, including Wellbutrin, Risperdal and Zoloft. I also smoke marijuana to relieve acute feelings of depression. Pills and cannabis alone do nothing but control the brain chemical balances enough to where you can function at a certain level. And it's only a small part of the equation. It also takes therapy, friends, family and a routine to keep you focused and someone to talk to when it gets too much.

For others, depression is so crippling that they cannot even leave their homes. And some rely on public assistance to get by.

You just don't understand humiliation until someone tells you to "Suck it up!" Or "You're faking it" or "You're lazy". Or "selfish", a "worry-wart" or any number of insensitive and thoughtless things. I have actually been told "If you want to die so bad, why don't you just kill yourself and rid the world of another useless idiot like you". I'm embarrassed to say it, but there are actually people like that in the world.

NOBODY wants to live this way. I never raised my hand in second grade and said "When I grow up, I want to have feelings of hopelessness and despair, to fight back thoughts of killing myself daily and to take pills every day to function at the most basic level of human existence."

I wish I could say that the medications alone changed my life. That I could say that things suddenly got brighter and life was suddenly worth living, that I could smile genuinely and feel the same happiness I see in others. But I can't. Even with the best medication and therapy, I still have to carry on with a void and emptiness nothing could fill. It's like feeling like you don't have a soul. You know you have one, you have empathy and compassion for others. You feel their pain, but you just can't describe your own. And that's what makes depression so hard to talk to people about. You feel so guilty and ashamed for needing anyone's help. And nobody likes a whiner.

So you take it out in one of two ways - some do it internally through self destruction. Or externally by lashing out at others.

Or the third way; Get help. I took things out internally. Even if they weren't my fault.  And I'm just learning to unlearn that behaviour. But it's going to take time I'm 45 now and I'm sure that had I not gotten the help I did, I would not be here telling you this.

I still fight minute by minute with feelings of worthlessness. That nobody cares about me (In fact, I generally feel that most people hate me, that I am unworthy of the time of day from them, let alone their attention.) That I am not worth knowing or loving. And that everything would be better if I just didn't exist. Not a day goes by that I don't think of how much relief I would get from something that would suddenly end my life. And my pain.

I have lived with this all my life. When I was 13, a family member went and dumped rocket fuel on a smoldering, but then containable fire with years of verbal and emotional abuse to the point I began attempting suicide in earnest (This is the source of my PTSD. And I have only spoken to this person only once and only through e-mail in the last 18 years.) I have been hospitalized many times from suicide attempts, several of them nearly successful, including a three week coma. Even psychiatry specialists were baffled

But another day comes and the sun rises. I take my pills and put on that happy-go-lucky facade. I find something weird or memorable and I talk about it here. And there are days I simply can't do that at all. In part because I also have arthritis and my joints hurt constantly, but much of the time, I'm too sad to talk about anything. It's my brain chemistry roller coaster in action.

There are also times the sky clears up and I feel some mediocre level of peace. I cherish those moments more than anything else whatsoever. Because they are so rare. But suddenly, I'm back down the spiral and I'm contemplating suicide again. It's crazy, I know. But please bear with me. Because this is the only life I have ever known.

I pray everyday the next day will be the one I feel okay. Or the one that never comes. The day I never wake up. But here I am still.  For now.

Sometimes I wonder why I keep doing it. And is this my life? To give others what I can never feel inside? To put a smile on the faces of strangers when I can't smile at all or even feel the happiness that creates a sincere smile? Without being told to? It doesn't make sense.

Starting this blog is one of the ways I'm learning to cope with my depression. To create that "happy place" where I could escape without bringing everybody down. To touch on things we have forgotten or are unknown to others. I carried around most of this information for most of my life and here, I have an outlet to dump all that. As well as act as a distraction from the bad news of today with something positive. Or weird.

I don't like to talk about bad news here - especially about myself. But this is one of those rare moments I have to get a certain weight off my shoulders FTW.

But every once in a while, I get a message like this and for a little while, I feel like there's new hope. 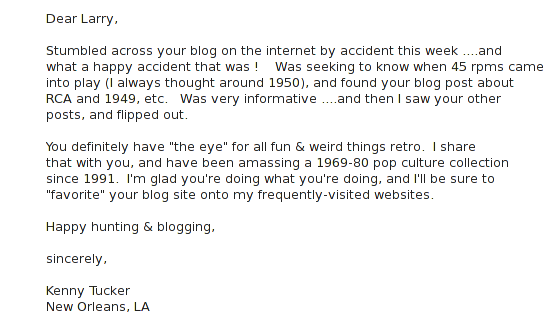 It's hard for me to understand this effect I have on some people. I'm flattered by it but at the same time, confused by it. I never saw myself worthy of any kind of praise. I should be proud of myself. But I feel uncomfortable doing that. Who am I to wave my own flag? My denial sometimes gets to the point I actually think they are talking about someone else named Larry.

But in some small way, if I made someone's day in some small redundant way, I might have what it takes to carry on for the rest of the day. But I wake up again and I'm back at square one. Is this life worth carrying on? I feel like a time bomb.

But never forget this; Little things do mean a LOT to someone with depression. You can't fix depression. There is no cure for it and there's lot of trial and error to find the right treatment plan (the one I have is very limited in it's success. It keeps it barely under control, but not much else. At least I have that. Depression has different effects for different people and no two treatment plans are ever the same.)

Most of all, it takes very special people. Those with positively reinforcing energy (and it's not some special super-hero power. If you are anyone's friend, you already have it.)

I don't expect miracles. But I guess if I can't find internal happiness, I'll accept the next best thing, a momentary peace of mind. And just swing from limb to limb on those alone.

Maybe I will finally find a way to stop feeling like this. Maybe they will finally invent that "happy pill" that changes everything - if artificially. Or a brain surgery that removes the part that's hurting me.

I'll do anything. Just make it stop.

I know there are people who care and worry about me. People who would be devastated without me and tell me so. It is for those people I struggle to carry on for.