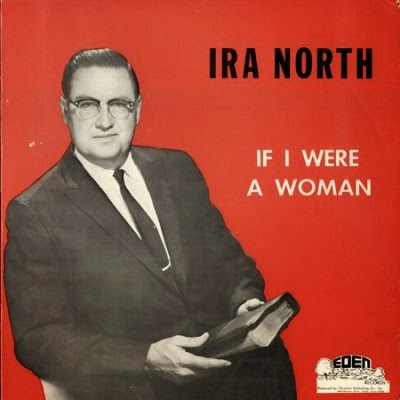 You've probably been seeing this record cover circulating around the interwebs lately amongst the world's worst album covers listings. But rarely do we get the chance to hear what one sounds like.

Well, thanks to our friends at Kill Ugly Radio, you can now hear this one.

And it's not really what you might be thinking (female viewers of this blog will be REALLY offended listening to this.) It's one big clueless (and hopelessly dated) misogynistic rant in the guise of a folksy sermon (like on just about every Southern religious sermon record, where if it wasn't white, Protestant, straight and male, it was to be subjugated.)

Ira North sure thinks he's a sweet funny preacher. And perhaps he was considered that in the Deep South of the late 1950s and early '60s before the Civil Rights Act, Women's Liberation and Stonewall. But his screed back then sounds vomit-inducing amongst the more evolved amongst us today.
Posted by Larry Waldbillig at 12:00 am