In 1979, Hellmann's introduced Big H Burger Sauce a product that was briefly on the market. It was a near perfect carbon copy of a famous burger "special sauce" used by a famous worldwide mega-conglomerate burger chain. And that might have been why this product disappeared as quickly as it came. But I could put that stuff on nearly everything - including hot dogs and it would just taste FANTASTIC. I know it was popular because everyone was talking about it back then.  So it must have sold very, very well.

But ever since then, finding anything about this product was next to impossible. It was like the product never existed. For years, I tried to describe it. But people would think I was talking about Thousand Island salad dressing (this was distinctly different.)

It was the only product marketed by Hellmann's on the West Coast that wasn't under the Best Foods brand name (as Hellmann's Mayonnaise has always been.) There were a few attempts to consolidate the name under the Hellmann's brand west of The Rocky Mountains. But we West Coasters FLATLY wouldn't hear of it and the idea never got off the ground. And we still won't.

So to this day, Hellmann's mayo is still known as Best Foods mayonnaise west of The Rockies. And that's that. Period. 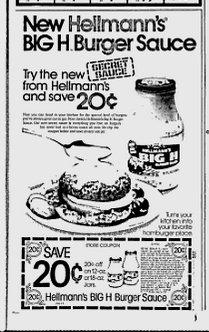