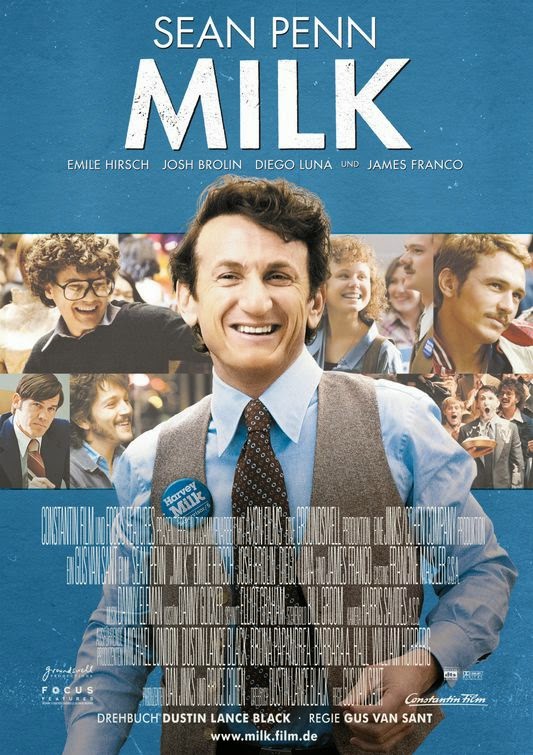 "Milk", starring Sean Penn and Josh Brolin is about San Fransisco City Supervisor Harvey Milk, an openly gay businessman who had gotten sick of not only watching other gay people being harassed and bullied by a stiff city establishment but other minorities such as African Americans, the poor, elderly and people with disabilities being used as scapegoats and the first to suffer in any major city decision of that time. He not only stood up for the underdog, but he championed them. He put PEOPLE first - something a lot of politicians only pay lip service to. Milk actually did something about.

Milk transcends being a mere gay bio-film. While Milk's sexuality is never too far off, the real gist of the movie is how he gave the system a major wake up call and how he paid the ultimate price for standing up for what he believed in. From his beginnings as a flamboyant camera store owner in the Castro district of San Fransisco to the political battles he fought against the city and self-righteous anti-gay crusaders such as Anita Bryant to finally being elected city supervisor of San Fransisco and the turmoil that followed, especially from his biggest opponent, Dan White who assassinated Milk and San Fransisco Mayor George Moscone.

The story of Harvey Milk is a fascinating one for me, having read The Mayor Of Castro Street by Randy Shilts several years ago.

I always loved his appeal to the social outcasts and how he worked to level the playing field for all people. We sure as hell could use a guy like him today.

One could only wonder what could have been had he not been assassinated. He most likely would have ended up mayor of San Fransisco and would probably have made it to Washington DC by now. I'd take Harvey Milk anyday over Diane Feinstein.

Harvey Milk never got the recognition he truly deserves for not only breaking down a LOT of doors and glass ceilings for gays and lesbians, but for inspiring all of us that the underdog can lose many battles, but still win the war in The Good Fight. The people know a true hero when they see one.
Posted by Larry Waldbillig at 12:00 am