It's been that way as long as I can remember.

One demographic who never seemed to mind staying home watching TV on Saturday night was the elderly. Usually because they simply can't/don't want to leave the house. But more in fact, one particular show was their only excitement for the week. Hosted and produced by a graying former accordionist with a funny German accent who LOOKED like them.

His name was Lawrence Welk. 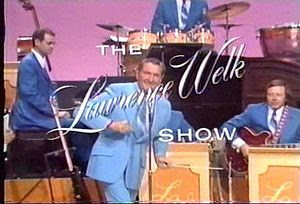 The Lawrence Welk Show was a staple of Saturday evenings over most ABC affiliated TV stations from 1955 to 1971 and in syndication until 1982.


The show was a sort of throwback to the musical variety show of the '50s, where you can see/hear everything from polka music, ragtime, lounge, big band, waltzes, some religious hymns, dressed-up country and Irish ballads. Lots of dancing and costumes. But absolutely NO rock n' roll or current music in ANY form.

(VERY bizarre exceptions were made sometimes.....)
(Yes, Myron Floren, we "knew" that was just a frog in your throat.....)

Welk, and his frequent sideman, Myron Floren knew his target audience. Staid, conservative (back when that word meant something TOTALLY different than what it means today.) Whiter than a percale sheet. And as square as the screens of the TV sets his show was beamed into.

These were people who still grumbled about the Beatles (One of the most surreal moments of my life came while visiting an elderly neighbor who regularly watched Lawrence Welk and she complained how music to her went south since the Beatles came "Why can't they make nice music anymore. like this?....." The song they were singing on the show was "Yesterday".)

That was the Lawrence Welk crowd.

And all between pitches for Rose Milk hand lotion, a regular sponsor of the show (which Welk confessed to using too.)

This show was everything I, a kid of the '70s HATED. I wanted to see the cars get smashed (like on CHiPs and Dukes of Hazzard) and foxy babes. But something my mom, who came of age in the late '40s/early '50s when this kind of entertainment was your average network TV fare, watched RELIGIOUSLY.

Between the bubble machine (which accented his music description as "champagne music"), the campy acts and the hand lotion pitches, gay America secretly also LOVED this show as much as the Geritol drinkers.

But it all came to an end when Welk's syndicator cancelled the show for good. Welk went into semi-retirement, moving his old shows to PBS where they ran for decades to this day as a "best-of" series.


Lawrence Welk himself passed away in 1992. But the show continues to run on some PBS stations with various former cast members hosting the performance segments.....
Posted by Larry Waldbillig at 11:55 am