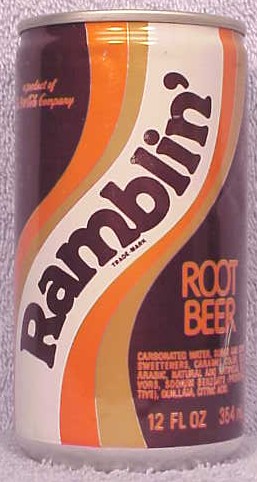 When Ramblin' Root Beer came out, it was puzzling - did the world really need another root beer?

There was already Hire's, A&W, Mug, Dad's, Barq's, Shasta, Faygo, Nesbitt's and various store brand knock-offs. So what made Ramblin' any different?

Well,......nothing actually. I swear it was just Dad's root beer in a different can.

But sometimes, the selling point in mass produced soda isn't really the flavour, but the very perceived lifestyle of the consumers of this product. Ramblin's first TV commercials evoked an outdoorsy kind of feel with banjo music and a John Denver sound-alike singing the jingle. The later commercials were more mainstream....


Ramblin' was discontinued in the '90s when the Coca-Cola company, which made both Ramblin' and Dad's bought the Barq's root beer company.

Posted by Larry Waldbillig at 7:54 pm